Raised in the Swiggins Navy Family on the Kraken planet Titan, Charles Swiggins was the youngest of 30 siblings. Graduating from Wet Point with top honors, he quickly rose through the ranks to become Captain of his very first ship in the Royal Fleet. This ship was called the ‘Sweet Homboldt’.

Tasked with finding and defeating Pirates, Swiggins set out with a loyal crew on many succesful sortees. One day, the Homboldt chanced upon the massive Pirateship 'Colossus' helmed by the dreaded Captain Inkbeard!

After a furious battle, which reduced both ships to floating heaps of debris, the two captains were the only ones alive for a final showdown. Being nearly overpowered, Swiggins' grasping tentacle found a chain just below the surface of the churning water. Powered by his desperation he hurled the object at his foe. This object was Sweet Homboldts anchor! With one massive blow, Swiggins ended the biggest Pirate threat on Titan once and for all.

Now an Admiral, he has exchanged the seas for the voids of space where his fame and leadership skills have found him a contract among the Awesomenauts!

In the beginning, Swiggins was a part of the 2012 Design-Your-Naut contest, in which hundreds of character concepts were sent in, with only one making it into the game. Admiral Swiggins was initially chosen by Ronimo Games staff to be in the top 5, of which would then be voted on by the community in order to decide which of the 5 would be made. User Channfree's Admiral Swiggins was chosen.

Another contest was later made to decide how Admiral Swiggins would look. Once again, the community was able to send in their entries, showcasing many different depictions of the character. In the end, user coffeybean4 won the contest with the design seen below.

"Down from the seas into space

Swiggins is known for the phrase:

"He is our brave admiral!

He'll bring us tea and mackerell!

▶️"You made me spill my tea! This... IS UNFORGIVABLE!"

▶️"I fought barnacles tougher than you!"

▶️"Haha! I swabbed your deck!"

▶️"You've got to be squidding me!"

▶️"What do you get when you cross a squid admiral with a very large anchor? You're about to find out!"

▶️"And I thought I was spineless!"

▶️"Do you fear death?" - A reference to Davy Jones, [3] a character in the Pirates of the Caribbean [4] film series.

▶️"They are going to make sushi out of me! Or is it calamari?"

▶️"You may fire when ready!" - A reference to Moff Tarkin, a character from Star Wars Episode IV: A New Hope. [7]

▶️"There's no place like Homboldt!" - A reference to the quote from The Wizard of Oz.[12]

▶️"Time for another cup of tea!"

▶️"Into the fray once more!"

▶️"I'm terribly sorry for any incovenience caused as a result of your death."

▶️"Hahaha! You brought a knife to an anchor fight, lad!" - A reference to the saying, "Don't bring a knife to a gunfight."

▶️"You are no match for the admiral!"

▶️"Kaboom!" - A reference to Salvatore, a character in The Legend of Zelda - Wind Waker [16]

▶️"Give a man a fish, feed him for a day. Teach a man to fish, and he'll go on a fish killing spree!" - A take on a well-known proverb.

▶️"So ends the journey of a space admiral..."

▶️"You sunk my battleship!" - A reference to the Battleship [19] game.

▶️"So sorry! I believe I've become terribly attached to you!"

▶️"Perhaps it will be in your best interest to just stand still."

All of the new lines added by the Abyssal Swiggins skin are a mix of Swiggins' regular lines, but reversed with a deeper voice, and actual gibberish, also deepened by voice filters. 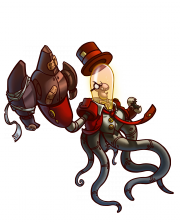 So we asked the guys at Team Meat if they would be cool with us making a Dr. Fetus skin for Admiral Swiggins. They told us "awesome. do as you wish with it :)", so here's what would have happened if Swiggins went to Med School instead of War School. He still ends up as an Admiral in the Navy, somehow - but now with an extra degree and a violent hatred against jumping pieces of bloody meat.

This DLC contains a custom skin for Admiral Swiggins in Awesomenauts, and will automatically unlock the character if you have not already done so. - Official Steam Store description.

In this skin, Swiggins is replaced by Dr. Fetus, a character from Super Meat Boy which can be seen floating inside the glass tank where Swiggins' head is normally. The tentacles are replaced by robotic limbs and the armor has a darker color scheme, a suit and a tie. The anchor is covered in bandages and the glass tank has a top hat and monocle. 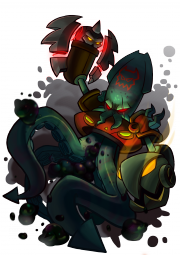 This DLC contains a custom skin for Admiral Swiggins in Awesomenauts, and comes with a fully customized voice set!

If you have not already unlocked the character, this DLC will do so. - Official Steam Store description.

This skin removes Swiggins' cap and glass tank and gives him different skin color (dark green for red team, light blue for blue team). He has a glyph drawn on his forehead and red glowing eyes. The armor, anchor and claw hand have evil-looking faces on them. Anchor Hook's chain is replaced by a tentacle. Being a premium skin, it also comes with different voice acting.