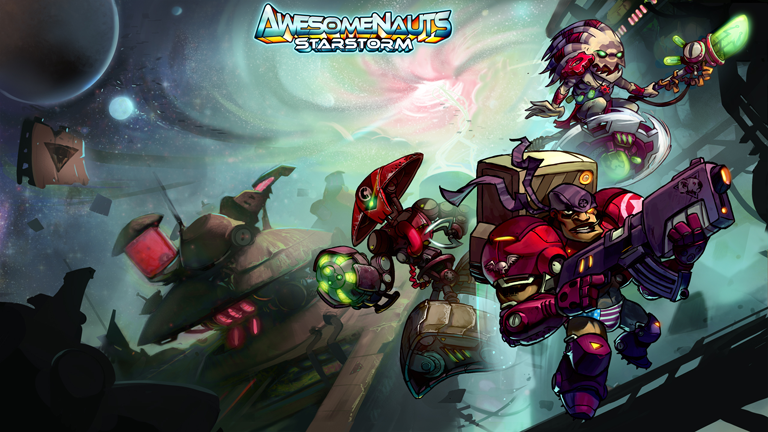 The universe is in turmoil as the ever-enduring stalemate between the droid armies of the Ones and Zeros reaches a fever-pitch! Millions of battles have been fought across the scorched wastelands of Sorona, the dense jungle reservation of Ribbit IV, on AI Station 404’s installations and in the recently discovered mystical temple of Aiguillon.

Meanwhile, in the Raki star system, a gigantic remnant of the first AI war drifts near the burning star. This massive unfinished battle station, an abandoned relic of the first generation of robots, is called The Starstorm.

Construction on the station was halted after the defeat of the robots. It was considered to be their ultimate weapon, holding the power to transform the energy from stars into a whirling mass of destruction. Its hull bears thousands of robot ground troops slumbering in their rusty sleep.

The space platform and its robotic legion were thought to be permanently powered down after the first AI war and the station has been idly floating around in space ever since. The Starstorm was never fully operational, until recently...

Emergency reports of the sun imploding into a giant burning space storm have indicated that the Starstorm has somehow been activated. The news of the clearly battle-ready station has drawn the attention of the Ones and Zeros. Both factions have sent their best teams to investigate and secure the station and gain control of the Starstorm’s destructive power!

The Awesomenauts: Starstorm Expansion is the first paid downloadable content for Awesomenauts on Steam. It unlocks 5 playable Awesomenauts and adds 3 new music tracks. Only those who own the expansion are able to play the new characters and hear the new music. Those who do not own the Starstorm expansion can still join your games, chat, use the twin-stick controller support and fight alongside or against other players who have the new characters.

Sirens Before the Storm[edit | edit source]

Several stretch goal features from the Starstorm Kickstarter were added to the game, free for everyone to use.