Ayla is a devious little girl. She comes from an old species called the Sadak, known for their great psychokinetic powers. Her parents were killed during the great Sevenelevian Coupon Wars and she was adopted by a sweet alien family. The couple grew fearful, however, when suspicious things started happening around the house: evil drawings on the wall, weird sounds at night and dead rapper frogs in the garden.

When they finally figured out Ayla's "gifts" and dark sense of humor, they turned her over to the Sunny-daisy School of Social Re-adjustment. A few short days and several fires later, she got transferred to a maximum security psychiatric ward where she went berserk and chose the nearest wall for her stage exit.
Using her cute puppy-dog eye routine she managed to hitchhike her way across the galaxy and ended up with the Awesomenauts who, after her tantrums left half the ship in ruins, couldn't wait to get her in a droppod and away from their precious belongings. Still, she's a cherished member of the group, requiring only a gold-star sticker for her efforts on the field of battle!

"Who is gonna wreck this party?

Who is, who is, gonna wreck this-?

▶️"I'm taking you down! Scouts honor."

▶️"Come out, come out, wherever you are." - A reference to the game 'hide-and-go-seek'.

▶️"Don't be a scaredy cat, defend!" - Possibly a reference to League of Legends character, Annie.

▶️"My teammates, they do nothing!" - Possibly a reference to The Simpsons[3] character, Rainier Wolfcastle[4].

▶️"If anyone needs me, I'll be raiding the cookie jar!"

▶️"Sugar, spice, and everything DIES!" - A reference to the nursery rhyme "What Are Little Boys Made Of?"[8]

▶️"Sugar, spice, and everything DIES!" - A reference to the nursery rhyme "What Are Little Boys Made Of?"

▶️"This place looks dangerous. I like it!" - A reference to Catwoman[9] in Batman: Arkham City[10]

▶️"Heh ha ha! Were you just beaten by a little girl?"

▶️"Ha ha! Beaten by a little girl." - Possibly a reference to League of Legends character, Annie.

▶️"I didn't do it. No one saw me do it. There's no way you can prove anything." - A reference to Bart[11], a character from The Simpsons cartoon, which has an identical quote.

▶️"I'm putting the fun in funeral."

▶️"Unlimited Power!" - A reference to Star Wars[16] character Palpatine[17], who has the same quote, also used by Awesomenaut Genji.

▶️"The gloves are off now!" 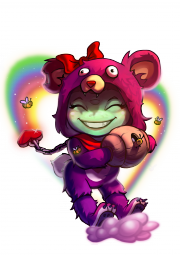 This skin gives Ayla a bear suit wearing a ribbon, and a wooden bee hive for restraining her hands. Her chain's lock is replaced with a heart shape.

This skin creates new "heart" particles when Ayla goes in Rage mode, and the trail for Chain Whack is now a rainbow. Small bee particle effects appear around Ayla. It also alters the Evil Eye projectile, turning it into a heart with a rainbow trail. 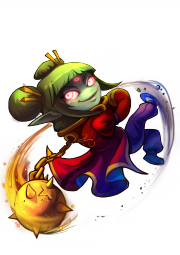 "Ayla, you are now a monk, a disciple - you are prepared. Your studies are now complete. These are your instructions: remember the way of Shaolin, the true reflection of wisdom. Respect the way. Be true Shaolin. Now you go out into the world. Always be merciful. Practice kindness." - Official Steam Store Description

This skin gives Ayla a traditional chinese attire that does not have a lock restraining her hands, and a new pair of shoes. Her chain is replaced with a golden flail, and she has a new hairstyle, which is colored much darker.

This skin gives the Rage bubble a new pattern of symbols. 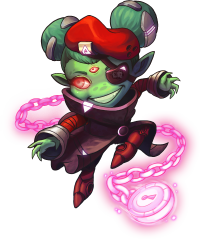 There was a time when the Killer Koalas were as legendary as the Awesomenauts are today, and one of their members actually came from the future! Ayla used one of Yoolip's inventions to travel back in time, and she became the youngest member of the Killer Koalas. They gave her a pretty neat eye-patch to help her focus her psychic abilities. She became known as one of their most feared members and was nicknamed 'The Eraser'. Augmented Ayla is a FREE skin for members of the Awesomenauts Steam community. Click “Follow” on the Awesomenauts Steam store or community page to get it. So join up today and get Augmented! - Official patch description.

This skin is part of the "Killer Koalas" group of skins and as such, gives Ayla a futuristic military attire, including a beret, a glowing eyepatch, leg armor, a trenchcoat with long sleeves, and stronger-looking handcuffs. Her lock and chain are made of energy (with matching trails when swinging it).