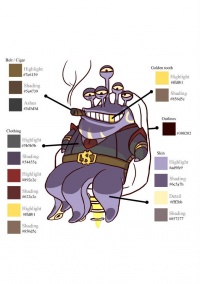 Blabl Zork is the uncle of Derpl Zork and the ruthless, cunning president of Zork Industries. Blabl is also the kingpin of the Awesomenauts operation, responsible for its organisation and assembly. Through extensive and ongoing drilling efforts across various planets and asteroids in the galaxy, Zork Industries have established themselves as a key player in the intergalactic Solar trade, thanks in part to Blabl's relentless greed and disregard for the life of his employees.

Blabl has no compassion for his unintelligent nephew Derpl, who is also first in line to succeed him as president of Zork Industries. To ensure this would never happen, Blabl sent him to fight on the front-line in hope he would be killed in battle. Blabl was also directly involved in Ix the Interloper's recruitment into the Awesomenauts. He was impressed with Ix's destructive abilities, and told him that the Awesomenauts were an environmentalist group.

His character is featured in the tutorial level mentoring Sheriff Lonestar, whom he refers to as "Mr. Lonestar", in which he states he paid "top coin" hiring him.