From Awesomenauts Wiki
(Redirected from Category:Slow)
Jump to: navigation, search

Slow is a status effect that makes the victim move slower and have reduced jump height.

When two or more slows from different sources are applied to the same target they will not stack: the strongest effect will always be applied or overwrite the weaker one. Different upgrades from the same ability will still stack, however. 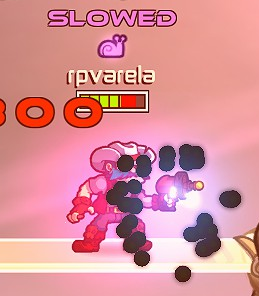 Slow is represented by a snail above the healthbar and a purple aura around the character.

Note: Abilities like Yuri's Time Warp and Raelynn's Timerift are labeled as time modifiers and are not considered "true" slowing effects.