Chucho comes from a rich, if slightly shady family called the Krokk. Let's face facts here: they may have achieved fame and fortune on Calias by hunting down the biggest criminals in the galaxy, but they're just as bad themselves. But hey, it takes a crook to catch a crook, so Chucho has taken up the family mantel of being a BAD-ASS BOUNTY HUNTER.

Which wouldn't be so awkward if he didn't have the world's biggest lisp. Oh well. No time for that, because the self-styled "Time Krokk" is on the hunt for a time-travelling criminal (a practice strictly forbidden under the intergalactic portal law, ever since someone went back in time to steal cocoa beans for a fondue, and accidentally ended up wiping chocolate from history).

Since the Krokks and the Zorks have been vicious rivals for centuries, he raised quite some eyebrows when out of nowhere he signed up for the Awesomenauts. In his inventory rests a suspicious, smelly time slipper that might lead him to an altogether deadly confrontation with his unsuspecting bounty...

The Krokk have been suspected to work together with many criminal organizations such as Shishu the underwater mafia, the religious clown killer known as the Grint, and even some suspect links with the lizard Sisterhood of Coba. None of these have ever been confirmed however. Chucho's homeplanet is Calias which is a rich and tech heavy planet. A lot of rich industrial corporations are based here mainly due to the mining of power crystals on Luxor, Calias' last moon

▶️"Hear the roar of my Ramona!" *Revving engine*

▶️"You're giving me a serious case of road rage!"

▶️"I'll sick the Sisterhood of Coba on you!"

▶️"You're all merely a payday for me!"

▶️"I'll forward the bill to my abuelo!"

▶️"Back to collect some jobs!"

▶️"Not one of you gets caught before I return, understood?!"

▶️"Time for a well-earned siesta!"

▶️"I'm hunting for the person who wore these smelly time travel slippers."

▶️"I come from a long line of crazy conquistadores, so you'd better not mess with me!"

▶️"Time to ride into action! From here until the end of the Omicron! Let's go!"

▶️"You sound desperate for this desperado!"

▶️"Ramona, my darling! Let's go on a nice honeymoon!"

▶️"Let me teach you about zen and the art of hunting bounties!"

▶️"Want to know what's in my guitar case? Death! And chrome varnish."

▶️"I'm a Krokk of principles! I principally love hunting down people"

▶️"Pretty sure my bounty's around here somewhere. That time travelling nutter..."

▶️"Is there life after death? Touch my Ramona and find out!"

▶️"When Chucho Krokk catches you, you don't hang... You get a bullet!" - A reference to The Hateful Eight.[3]

▶️"Suffering Succotash!" - A reference to Sylvester[4] from the Looney Tunes[5] franchise.

▶️"Did they scratch you, Ramona?!"

▶️"I hope my bounty gets your children through college!"

▶️"Frozen... heheheh, in my headlights!"

▶️"Hit the road!" *Engine powering up*

▶️"No more wibbly wobbly timey wimey escapes for you, Yoolip!" A reference to Doctor Who[10].

▶️"That'd the last time you mess with time!"

▶️"Message from the beyond: you'll be dead soon!"

▶️"No one ever accused this skeleton of having a heart!"

▶️"Maxed out my DeathCard™ there."

▶️"Could use some cooling liquid."

▶️"I already dropped, so I can shop!"

▶️"Gotta check in with the big guy upstairs!"

▶️"I'm watching you! Even though this hat is covering my eye."

▶️"This is hell on wheels!"

▶️"My demon quarry getting away? No way!"

▶️"Forces of darkness will applaud me as I stride through the gates of hell, carrying your head on a pike!" - A reference to The Curse of the Monkey Island.

▶️"Do you think the brim of my hat is too wide? I get so self-conscious."

▶️"I've got tons of expressions! Here's me doing joy! And misty-eyed nostalgia!"

▶️"I skeleton walks into a bar and says: 'I'll have a nuclear tonic and a mop!'"

▶️"When you ride alone, you ride with me!"

▶️"Last thing I remember is some idiot demon spraying gasoline on me." - A reference to Zoolander.[14]

▶️"I broke my funny bone a long time ago."

▶️"I'm not putting my lips on that. I don't think I have lips anymore!" - A reference to Full Throttle[15]

▶️"Thankfully, my bike's warranty lasted until way after I died!"

▶️"I told you you were gonna pay!"

▶️"One demon after the other!"

▶️"Your pets are no match for my bike, old fool!" 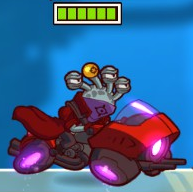 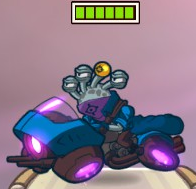 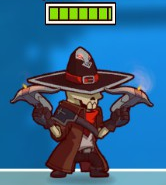 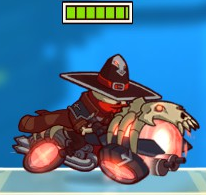 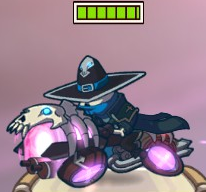 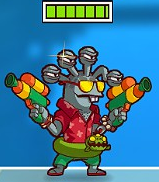 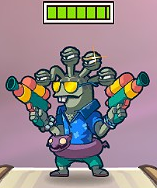 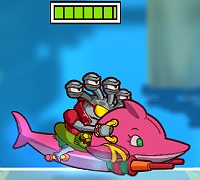 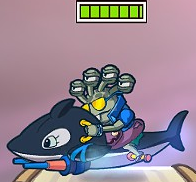 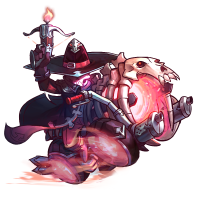 As the Inquisition engulfed Europe in the first centuries of the previous millennium, whispers spread of a dark hunter. These stories spoke of a man wielding weapons forged in Hellfire, laying waste to demons and witches and leaving only charred skulls in his wake. Even the the fiercest demons would scatter to the winds as soon as they heard the roar of his steel horse, and their numbers dwindled rapidly.

After slaying the last demon in Europe in a dark forest late in the fifteenth century, the man got atop his steel horse and set off to another world in need of his services. One of the villagers saved by the man said he had a face pale as bone and introduced himself Skull Chopper Chucho, and that he would return if our world was ever threatened by hellspawn once more.

This DLC contains a custom skin for Chucho Krokk in Awesomenauts, and comes with a fully customized voice set! - Official Steam Store description.

This skin turns Chucho into a skeleton, and gives him a tan jacket and a wide-brimmed hat that covers his eyes. He also has a shoulder pad with a cross on it. Chucho's pistols are replaced with crossbows. The Hyper Bike's front is replaced with a demonic skull and a large glowing portal, and it has bones down the spine and crosses in its thrusters. All of the bike's glow is now bright red on red team (they remain purple on blue).

Double Pistol now makes fire while shooting and has a new impact graphic. One-Armed Chameleon makes the skull on Chucho's hat glow. Sticky Bomb has a skull on it and has a new sound effect for ticking down. Bike Blaster has a new impact graphic when hitting an enemy. Mounting or destroying the bike has new graphic and new sound. The Turret now has a more detailed cannon and a team-colour banner hanging from it. Detonating the bike causes Chucho to pull out a purple rune bag and crush it. 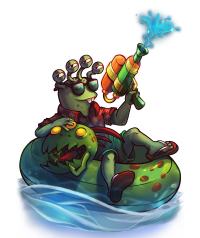 Even an infamous bounty hunter needs to let off a little steam sometimes and Chucho could do with a little sun. Equipped with two water pistols, a swim ring, and an inflatable plastic mammal, he's ready to just lie in the sand and work on that tan a little. That said... the water pistols look surprisingly similar to his regular pistols with some cool modifications, and you can hear a couple of sticky bombs rattling under his swim ring. Who ever said you can't be ready to collect bounties AND relax on the beach at the same time?

This DLC contains a custom skin for Chucho Krokk in Awesomenauts!

This skin gives Chucho a Hawaiian shirt, shorts, sandals, and a pair of sunglasses below his eyes. His robotic eye is gone. He also has a pool ring on, which looks like Gnaw on red team and Nibbs on blue team. Chucho's pistols are now water guns. His bike and turret is replaced by an inflatable pink dolphin on red team or an orca whale on blue team. He has a trail of water following him while riding his bike.

Double Pistol and Bike Blaster now shoot bubbles instead of bullets and have new sound effects. Sticky Bomb looks like a beach ball and gets a bubbly sound effect while ticking down, in addition to the default one. Nitro Boost now looks like a stream of bubbles, and plays a new sound effect (either a dolphin noise or an orca noise depending on which team he's on).

Showcase starts at 0:40 in the video.

Chucho Krokk is a feared bounty hunter from Calias, scouring every corner of spacetime between here and the Omicron on his hyper bike. He has been nicknamed "the time krokk" because he specializes in time travelling criminals, which has been strictly under the intergalactic portal law since someone went back in time to steal cocoa beans to make chocolate and caused the disappearance of cocoa trees all around the galaxy.

Since the Krokks and Zorks have been vicious rivals for centuries he raised quite some eyebrows when he signed up for the Awesomenauts. With a smelly time slipper as evidence he is on the hunt for one of the other Awesomenauts. This can't end well...