Excerpt from her spacelog: "It's just like, dude, I was cruisin' the galaxy, you know, in this totally tubular, space-van, searching for the best cosmic waves man. And, you know, like, when I was, like, you know, like acing these waves once, there was like this giant robot corporation that wanted to make like these waves like into a giant galactic like battlefield you know? And I was all like, oh man, that's so un-gnarly dude. But those robots were all like 10100111001 or whatever. So I was all like, yeah but ok, you know? And then these robots were all like, ohh we have to fight each other. And they were like shooting lasers at eachother man. And I was like, man, I gotta fight, you know, like totally with these robots against the other robots because it's like, you know, whatever."

▶️"You are totally going down!"

▶️"I'm taking all you posers out!"

▶️"Hang tight, be right back!"

▶️"Like, all these really shiny things!"

▶️"Nobody puts Coco in a corner!" - A reference to Dirty Dancing[2].

▶️"Talk to the cyber glove!" - Possible reference to Terminator 2[3].

▶️"Ugh. Requesting support or something."

▶️"I'll like, totally be back!" - Possible reference to Terminator[7].

▶️"Did I, like, break your concentration?" - A reference to Pulp Fiction[10].

▶️"Whoa, you turned into a newt already?!"

▶️"They're putting us to the torch!"

▶️"Argh, they're putting us to the torch!"

▶️"Back to the mansion, dudes!"

▶️"Crystal ball, will I meet a hot 'naut today?"

▶️"My cauldron is bubbling all groovy and nice!"

▶️"Lemme wipe that for ya!"

▶️"Turn around, step on another frog!" 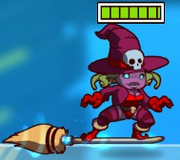 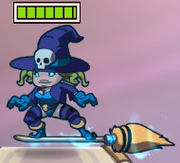 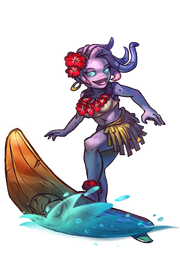 The pattern inside Ball Lightning is changed. 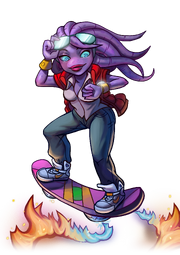 "Coco has accidentally been sent back to the year 2015 by mad scientist monkey Yuri! 2015... when hoverboards had a weirdly nineteen-eighties-like design! Coco McFly must now find a way to go home in the future! Will she ever get back?" - Official Steam Store description.

In this skin Coco is dressed up like Marty McFly from Back to the Future, complete with jeans, shirt, jacket and tennis shoes. Her goggles are replaced by sunglasses and she has a wristwatch.

The pattern inside Ball Lightning is changed. Her Blaze also gains a fiery effect, similar to the one left by Damage Over Time attacks like Earthquake. 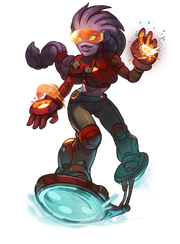 This skin was awarded to players who donated to the Bronze Coco/Silver Tier or higher, in the Awesomenauts: Starstorm Expansion Kickstarter campaign. No official description available.

This skin covers Coco in futuristic armor with power gloves and a visor. Her board also looks advanced. Unlike the rest of her skins, Coco has a ponytail on this one.

Ball Lightning has a different look on this skin. New hexagon particle effects are also added to Blaze. 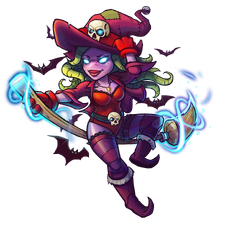 Witches were hunted down throughout the middle ages, but one of them managed to escape to a place where the inquisition was unable to follow her: a planet near the outer brim of the universe, called Okeanos. On this world she was finally free to practice her magic. Over time, the Witch traded her trusty broom for a more modern combat waveboard and updated her wardrobe.

Old habits die hard (just like witches, by the way), so on one special day every year the Witch still dons the outfit that she wore so many years ago and visits Earth on her broom. Together with the Earthlings she celebrates their victory over Witchcraft, creepyness, and ghouls... or something. Like, whatever. If only they knew...

This DLC contains a custom skin for Coco in Awesomenauts, and comes with a fully customized voice set! If you have not unlocked the character yet, purchasing this content will do so. - Official Steam Store description.

This skin gives Coco a witch costume, including a pointy hat with a skull strapped to it, a jacket, a leotard, a belt with a skull buckle, striped socks and pointy shoes. Her hair tentacles are colored green instead of the usual purple and her hoverboard is replaced by a broom and she leaves a faint trail of bats behind whenever she moves. Her skin is colored differently on blue team.

Blaze leaves a more intense bat trail and ball lightning looks like a spinning jack-o'-lantern (which also explodes in a jack-o'-lantern shaped blast). Both skills have unique sound effects. 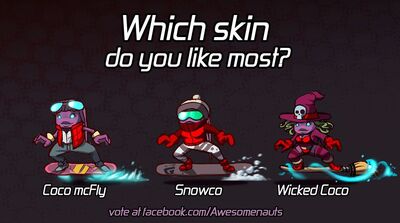 Coco McFly along with the other vote options.