Samuel "Deadlift" Gains was a young calf during "The Great Bovinion Wrangling" and escaped aboard a dairy transport bound for the Flexon, where all inhabitants are incredibly muscular! A Kremzon took him in and put him on a rough training regiment, to prepare for his revenge on Sheriff Lonestar.

Samuel grew stronger as the years passed, and one day, when Lonestar visited the planet, tried to ambush him at the spaceport. The cowboy saw through his plan and made Samuel lose his balance while he was preparing to throw a spaceship. Samuel woke up in a hospital with one of his arms and horns replaced by mechanical versions, and a note saying that they were a gift for "Pursuing a common goal." Lonestar and the inhabitants of Flexon thought he was dead, so his "revival" earned him the nickname: "Deadlift".

Back on his quest to avenge the Bovinions, Deadlift joined the Awesomenauts after telling Blabl Zork that he could pull out solar drills with his bare hands. He's secretly planning his final strike to put the cowboy out of business for good.

For he's the mighty, mighty Deadlift

And if you don't then you will get biffed

And after that 200 punches

Finish it off with 80 lunges

He's the baddest of the bunches

Throwing the dumbbells, raising the bar

This cow is udder udder muscular

Robbing that loner of his shining star

Making sure that he won't get far

Now his heart is pumping in his throat

Biceps and triceps in the overload

Only protein, he don't eat no oat

This naut is always in the fighting mode

▶️"You put the dumb in dumbbell!"

▶️"You mess with the biceps, you get the horns!"

▶️"I'll flex you into oblivion!"

▶️"I find your lack of strength disturbing!" - A reference to Star Wars.[1]

▶️"We have to defend our gym!"

▶️"Getting all kinds of gains!"

▶️"Gotta get the right gear!"

▶️"Does this come with a free protein shake?"

▶️"Going back for some dumbbell flyes!"

▶️"Almost went an hour without training!"

▶️"Going back for some barbell curls!"

▶️"Going back for some T-bar rows!"

▶️"We eat tiny people like you for breakfast on Flexon!"

▶️"Pumping iron! The best feeling in the world!"

▶️"I once tried to lift a warship. Cost me an arm and a horn!"

▶️"I always carry a set of galaxy-class dumbbells with me!"

▶️"Lonestar may have wrangled the Bovinian race, but he's not getting me!"

▶️"Someone call the Space Olympics. Tell'em it's cancelled: I already won!" - A reference to BroScienceLife.

▶️"Eat at least twice your bodyweight in protein. Every day!"

▶️"Don't try to get by or you'll get dealt with and trapped!" - A reference to Dwayne "The Rock" Johnson.[5]

▶️"I ain't even using my maximum strenght!" - A reference to Dragon Ball Z.[6]

▶️"Setting a benchmark for sprees here!"

▶️"That's what I call a superset!"

▶️"Just because we're in the same team, Lonestar, doesn't make us even!"

▶️"Watch your back, rodeo clown!"

▶️"I've been training my whole life to crunch you, wrangler!"

▶️"Pray for mercy, little one!"

▶️"Are you sure you're trained for this?"

▶️"I'm taking you out to pasture!"

▶️"We must defend our keep!"

▶️"If nothing else, defend our land!"

▶️"I live off the land, not a supermarket!"

▶️"It is disgraceful to leave the battlefield, I know!"

These quotes are a reference to Red Sonja.[9]

▶️"Are you sure you're trained for this?"

▶️"I dine on raw meat and sleep with fair cows!"

▶️"Kings beg for my aid, and gladiator oxen shake with fear!"

▶️"A band of Awesomenauts plucked me from my time!"

▶️"My fists are ready and my shield is waxed!"

▶️"I'm a barbarian, not a berserker!"

▶️"I've arrived on a chariot of fire!"

▶️"Another notch in my axe!"

These quotes are a reference to the 1982 Conan the Barbarian film.

▶️"See them driven before you!"

▶️"Here the lamentation of their women!"

▶️"See you on the plains of combat!"

These quotes are a reference to the 1982 Conan the Barbarian film. 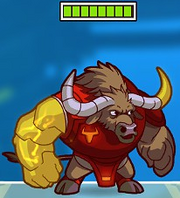 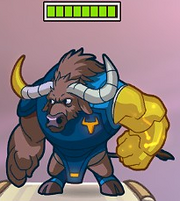 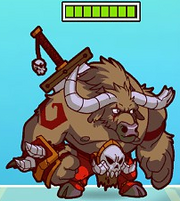 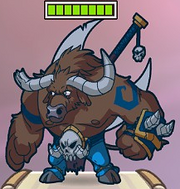 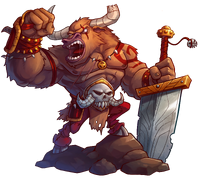 Between the times when the great Milk Sea drank Great Wisentia and the rise of the Calves of Moo-Noo, there was a beastly age on Flexon.

But hark! Here rises the Bullbarian from his long slumber! Having dined on raw meat and spiced milk, he sets off into the wild yonder. Kings beg for his services, witches tremble in his wake and gladiators shake with fear as he approaches. Now, he finds himself with a stranger crew still as a band of Awesomenauts have plucked him from the mists of his bygone era.

The times may be unfamiliar to him, but one thing is unchanged: in battle, the mightiest hoof still wins.

This DLC contains a custom skin for Deadlift in Awesomenauts. You need to have Deadlift available as a playable character in order to access the skin in-game. Owning this skin will also unlock the special portrait for use in-game. This skin contains a fully customized voice set! - Official Steam Store description.

This skin gives Deadlift the looks of an archetypical barbarian. He is shirtless, displaying glyph-like team-colored tattoos on his body and has a scar over one eye. While on blue team only, his fur has a darker shade of brown. His golden arm is replaced with a normal one and has a stone bracelet with spikes on it.

He is wearing team-colered pants and a large belt with a skull with tusks on it. The golden tip on his horn is gone. Instead it looks like the tip of the horn has been shattered. He also carries a large weapon (a sword on red team, a battle axe on blue team) on his back. This is purely cosmetic, however.

His Power Lunge is missing its hexagons for a less "high tech" look, Protective Pose has glyphs similar to his tattoos and a bull skull on it.