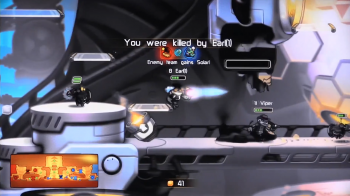 When 'nauts have no health left, they die. When a 'naut is killed by a player, all of the opposing players receive 25 Solar on console, and 30 on PC. The player that dealt the killing blow receives an additional 25 or 30 Solar. If killed by a Turret, Creep or die at the same time as they kill an enemy, then the additional 25 or 30 Solar is dropped on the ground where any 'Naut can pick it up. Players also lose 25/30 Solar on death.

Of course it is better to flee though, and Teleport back to the shop from a safe place. Players being chased by an enemies, should try to be unpredictable while going to a safe place. Going down from platforms or jumping mid-air after boosters, for instance, usually helps.

Dead players will get back to the Drop Pod station, where they can try and recover some of the lost Solar and access the shop during the countdown.