Click here to return to the Armory main page.

Droppods are small vehicles used by Awesomenauts to literally drop in on the battlefield. They are launched from large spacecraft floating high above the map. Awesomenauts will use droppods whenever they first spawn in a match (provided that no custom match settings preventing so are in place) and whenever they respawn after being killed.

Players are able to control droppods, making it go left and right, collecting Solar cubes while doing so. Successfully collecting many Solar cubes can mitigate the Solar lost upon dying.

It is possible for players to purchase and use unique-looking droppods. This has absolutely no effect on gameplay, being a purely cosmetic feature. They come in different tiers and can be acquired from the Armory by using

Droppod Parts, or purchased from the Steam Store for real money. 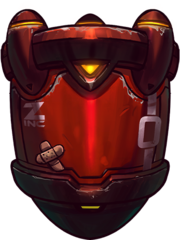 Built by Zork Industries, the Mark 1 MerkkRunner offers little comfort or protection to it's unfortunate pilot. Nicknamed "Shoebox", this machine is optimized for cost-efficiency and is the standard issue vessel for all mercenary contracts. Most teams find themselves upgrading to a better droppod as soon as funds allow... 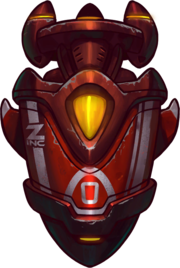 After spending millions of Solar on research to get the perfect aim right on orbital bombing, researchers at Zork Industries finally gave up and just loaded a bunch of warheads on a Zurian-controlled suicide ship. After numerous succesful drops, the Zurian pilot always seemed to survive for some reason. This gave way for the first line of personal droppods used for commercial orbit-to-surface transportation.

The Mark II is an upgraded version of the Mark I, and includes one small drink from the minibar, heating, and electric windows. 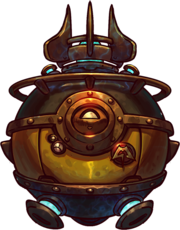 Boat-carpenter Sloggins created a one-man sinking boat as a sort of public entertainment. In front of a spectating crowd and sealed up inside, he'd lower the round container into the abyss and spend fifty minutes underwater. Then, he'd inflate the safety buoys, rise to the surface, and pass the hat.

When the Kraken of Titan started to retrofit their submarine vessels for space travel, the Nautilon proved to be surprisingly sturdy and effective in harsh conditions. 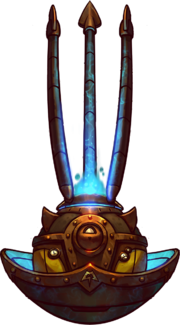 This deep sea exploration pod is used on Titan to venture down into trenches over 30,000 feet deep and search for items lost from passing cruise ships. Due to the high pressure and volcanic activity in some areas on the sea floor, the pod is fitted with anti-gravity compressors and shock-dampening tentacles that keep the Pod stable.

The mechanical tentacles are not only perfect for keeping the vessel on a straight course, but also act as a defensive meat/fish grinder when carnivorous predators in the deep try to take a bite. 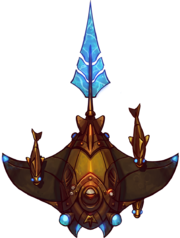 The legendary Leviathan was the first antimatter-powered vessel capable of both breaching the atmosphere and operating underwater. In 3392, it also became the first to conquer the Northern Flying Sea of Okeanos, by traversing the magnificent flying waters by partially flying upstream, and partially travelling in submerged form. This voyage opened up a new commercial seaway: a north-western vertical passage between the major oceans of the world.

The skill, professional competency and courage of the Leviathan's first captain, Commodore Swiggins Senior, was in keeping with the highest traditions of the Armed Forces of the Royal Titanic Navy. 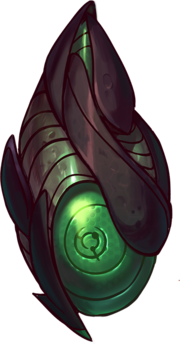 A common misconception is that Gorgos embryos are unripe eggs from asteroid Gorgi, large and slimy pike-like creatures who live in dark caverns on asteroid, deserted space stations and unattended space sheds. In reality, the eggs are synthetic sacs filled with Gorgos slime. This highly nutritious and oxygen-rich substance allows the passenger in the embryo to breathe normally and rapidly heal injuries. It's also a very sweet substance and considered by some to be a treat and delicacy.

The Plague Needle is a mutated version of the Gorgos embryo. The embryonic sac that still forms the core of the embryo has evolved into a hypodermal pin on the front of the Needle, allowing a rapid injection of synthetic Skroggle vomit into the targeted crashsight. This softens the crashlanding area significantly on impact. Since the substance also reeks like male Skroggle vommit, passengers should be warned that the crash site might attract female Skroggles.

The Dark Weaver started out as a secret project to create a time travelling pod, and was meant to weave the strings of time. In the end, it only managed to create loud, pulsing soundwaves instead of actually travelling through time. Nevertheless, the craft is now being used as a functional and fairly comfortable droppod, where passengers are able to listen to the latest hits as they resonate through the embryonic chamber that keeps them safe. 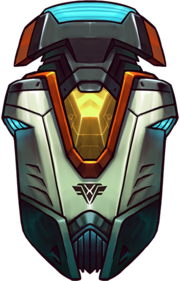 Created by famous arms dealer Vladimir Pewchenko, this simple-yet-elegant design uses cold-air blowdryers to cool the fusion engine, masking the heat signature of the vessel and allowing it to be dropped into combat with the lowest levels of infrared radiation. Unfortunately, the fusion engine makes up for that when it violently explodes on 'landing'.

The cramped titanium personnel capsule keeps the passenger safe and has two cupholders. The pod comes with a complementary and, may we add, classy bottle of 'La Vache Humide' Bovinian milk. 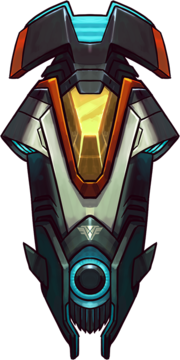 The Wraith is one of Fotonof's greatest accomplishments: a droppod with no carbon footprint and minimum impact on the environment. This pod will leave absolutely no trace after exploding! It is fitted with a skylight and glass floor, giving passengers a great view on the cosmos and their targetted crash site. It's not for the weak-hearted or barefoot!

Outfitted with the latest stealth technology and plenty of glass, the Kosmos DAK is almost perfectly invisible to the Amphibian eye. 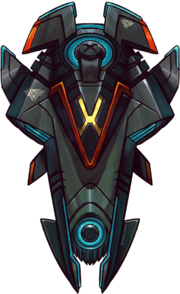 The spectre is a true technological marvel: robothand-crafted on Planet Russia and outfitted with over 14.000 individual cathode ray tube displays. The panels make the Spectre a true optical stealthcraft. Best of all: you can use the displays to watch any TV channel in the universe, allowing you to create a drive-in theater wherever you go!