Straight out of the marsh pond ghettos of planet Ribbit IV comes the amphibious B.I.G., also known as Nate Frogg, but mostly known as Froggy G. Growing up in the baddest part of town, struggle and incarceration surrounded Froggy from an early age. Taking part in his first swim-by shootout as a tadpole, Froggy seemed destined for a life of crime and prison.

"It's the Froggy G

Hop and jump from nook to creek

Croakin' rhymes from A to Z

It's the Froggy G

▶️"They see me whirlin', they hatin'" - A reference to Ridin'[9]: a single by American rapper Chamillionaire.[10] 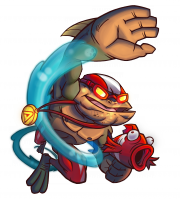 This skin gives Froggy G dark green skin and fish fins. He also wears a gold medal with the Awesomenauts emblem on it, along with new swimming gear. The Bolt .45 Fish-gun also gains a new color scheme, with stripes instead of polka dots.

The Twister Tweeters explosion effect is changed to a "ring" effect. 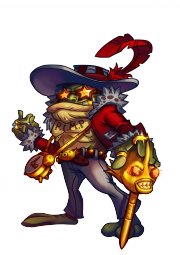 This skin gives Froggy G a striped hat, a new clock necklace, a coat with polka-dotted fur, star-shaped tinted glasses and a pair of white jeans. The Bolt .45 Fish-gun is completely golden, with a cane below it, and gems for eyes.

New gem particle effects are added to the Tornado. 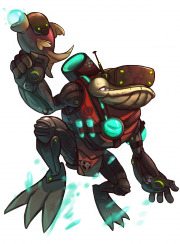 This skin was awarded to all backers of the Awesomenauts: Starstorm Expansion Kickstarter Campaign, and is also available on the Steam Store.

In this skin, Froggy G has futuristic armor, complete with a visor. His water canister also looks futuristic and he has water cartridges strapped on his armor. Froggy doesn't have hair on this skin. The fish gun has a visor too. This skin also adds robotic sounds to Froggy's Tornado and Frog Jump.