Ksenia was once the best hair dresser in the galaxy. Year after year she won the renowned Venus hair style tournament with her outrageous hairstyle creations. She enjoyed the great fame that came with the status as master hair dresser, unfortunately her father Vladimir Pewchenko a rich weapons manufacturer on planet Russia (formerly known as the moon) had other plans for her.

With a virtual reality hood dryer showing her a hair cutting simulator, he made her into one of the best assassins in the galaxy. While thinking she was cutting hair, in reality she was cutting down Pewchencko's enemies.

With no competition left her father assigned her to the Awesomenauts, where she still wears the VR hood. Many suspect that Ksenia is actually just watching soap opera's on her hood and perfectly knows what she is doing.

Straight from my dacha

Coming to the rescue

Thinning out your hairdo

Cutting to the chase

The hairdresser in space

And I cut your throat with grace

Come on let me trim ya

Just in time for nastrovje

Till I get them blisters

Got my skill from babushka

Faster than a sputnik

Chekhov's pistol, how ‘bout his clippers?

I’ll pistol-whip your do into zippers

It seems to me that cooked is your goose

So I’ll treat you nice, chill ya down with some mousse

If your hairday be bad

Let me fix your dead-ends

Trim you with my scissor hands

Also dubbing as a fighter

It’s not your hair I wanna dye

So it’s time to say goodbye

▶️"Is that a toupée you're wearing?" *giggles*

▶️"This is a hair salon, not hair saloon!"

▶️"My scissors are getting dull!"

▶️"Virtual insanity! Aha!" - A reference to the song Virtual Insanity[1] by Jamiroquai.

▶️"So what are your holiday plans?"

▶️"How is your family? Still good?"

▶️"I've got all the latest styles!"

▶️"I'm getting your team a comb-over" *giggles*

▶️"I've opened the hairway to heaven!" - A reference to the song Stairway to Heaven[2] by Led Zeppelin[3].

▶️"These extensions are to die for!"

▶️"Roll for initiative!" - A reference to Dungeons & Dragons[4].

▶️"I see a weak spot between your scales!"

▶️"Are you speechless or toothless?" - A reference to Toothless[5] from The How to Train Your Dragon[6] series.

▶️"Dragons have tattoo of me!"

▶️*sniffs* "I smell the scent of burned corpses!"

▶️"Bards should stick to singing, not hunting"

▶️"Lizards beware! The huntress is there!"

▶️"Another star in the sky!"

▶️"One dragon put down, one bag of gold!" 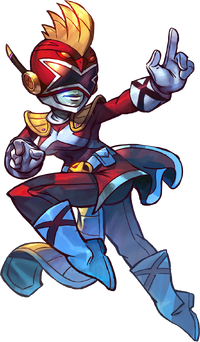 While she was a freshman at the Halion VI Hairdresser Academy Ksenia was chosen by a cosmic force along with four fellow students. This cosmic force promised to unlock the hidden potential within each of them, and arranged for brightly-colored spandex suits of armor to be delivered to their student dorms.

They were tasked with fighting evil monsters that threatened the galaxy, and boldly they faced their destiny. Sadly, the 'cosmic force' turned out to be some hacker kid that had been rejected from the academy a year earlier, and Ksenia's fellow chosen-ones were squished when a 20-story tall monster waltzed into town.

Ksenia still managed to defeat the monster on her own, and even though she never heard from the 'cosmic force' again after that, she continued to hunt down giant monsters as a part-time job during her time at the academy.

This DLC contains a custom skin for Ksenia in Awesomenauts! If you have not unlocked the character yet, purchasing this content will do so. - Official Steam Store description.

This skin gives Ksenia a suit based on the Power Rangers[11] franchise, with a similar-looking spandex suit, white boots and gloves and a bird-shaped helmet with a visor and crest. She also wields custom laser daggers. The helmet's crest, her clothes, shoulderpads and dagger hilts all have golden details.

Scissors throw's scissors are shaped like lightning bolts and vanish has different animations as well as special sound effects. 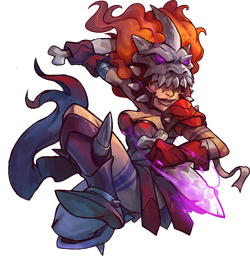 Scorched leaves flew on the wind as she made her approach. She had been stalking her prey for days, though the events that had lead her to this moment spanned decades. Ksenia tightened the grip on her daggers as she entered the cavern, where she was met with a pair of eyes that burned in the shadow. Only one dragon remained in this world, but it would fall to her blades all the same.

She leapt forward and killed her opponent with a single blow. Pieces of armor, weapons, and gold dropped all around her, but she cursed as the ring she had hoped to find was nowhere in sight. "Dammit, now I'll have to grind this part for the seventh time." As the townsfolk entered the cavern to thank her for saving their lives and proclaim her the greatest Hero of all time Ksenia was already browsing through the menu to restart this particular chapter of her favorite game: 'Warrior Princess: Dragon Huntress'.

Ksenia played the game whenever she had a few minutes in between the clients that visited her barber shop, but even when she was cutting their hair she sometimes felt like a fearsome warrior, ready to go toe-to-toe with even the mightiest of foes - she was a Dragon Huntress at heart!

This DLC contains a custom skin for Ksenia in Awesomenauts, and comes with a fully customized voice set! If you have not unlocked the character yet, purchasing this content will do so. - Official Steam Store description.

This skin gives Ksenia the looks of a typical Action RPG character, the likes of the Elder Scrolls[12] or Monster Hunter[13] series, giving her armor made from dragon scales and a dragon skull helmet with glowing eyes, horns and spikes. She wields bone daggers instead of her usual scissors.

Her skin mesh is removed, revealing her actual skin and her hair isn't stylized like in the default, being red and flowing instead.