Originally a security camera who was accidentally turned sentient by Professor M. Yoolip, Max quickly found a job with the Channel 7 Galactic News when that professor somehow slipped out of time. For years, Max happily caught the juiciest news from the most compromising angles.

When the war between the Ones and Zeroes broke out, Max developed a real taste for war reporting. Craving even bigger explosions and spectacle, Max decided it was time to start making the news himself and joined the Awesomenauts.

Welcome to Channel 7 Galactic News! Tonight… Fighting erupts in the Ribbit IV warzone. Seven judges poisoned in Zork Industries scandal ruling. And, subdermal parasites. Our special reporter Max Focus is on the scene and in the thick of the most breaking of news. The biggest explosions! Hard News. Real Talk. Brought to you live from the Channel 7 Studio. Sponsored by Zork Industries.

▶️"Breaking news: you're all idiots!"

▶️"Horoscopes: Today you will die!"

▶️"News team, assemble!" - Reference to a line from Anchorman 2: The Legend Continues[1].

▶️"It's the Slap-Zork!" - A reference to "The Slap-Chop"[2], a food processing utensil that was featured in TV infomercials.

▶️"Tired of wiping your bullets?"

▶️"Boom, and the Solar is gone!" - A reference to a commercial for "Cillit-Bang"[3], the original phrase being "BAM! And the dirt is gone!"

▶️"Comes with a free set of knives!"

▶️"And back to the studio!"

▶️"This is Max Focus, signing off!"

▶️"Live from the channel 7 studio!"

▶️"It's all coming into focus!"

▶️"The following images may be shocking!"

▶️"Channel 7, bringing you the biggest explosions!"

▶️"We now go live to the site of the killing spree!"

▶️"A chilling killing spree! Back to you!"

▶️"Another violent night on the battlefield!"

▶️"We seem to be having technical- *Powers down*"

▶️"There's something in my eye!"

▶️"Some feed for my Fishy?"

▶️"Lemme flutter away for a sec."

▶️"I had my eye especially polished for this!"

▶️"It wasn't me! It was the one-eyed abomination!"

▶️"Freshly belched up from the spawning pits!"

▶️"Ready to spy on the non-believers!"

▶️"What's a life of servitude without some guilty pleasures?"

▶️"People look at me sideways, which is rude!"

▶️"Oops! I was supposed to spy, not slaughter everyone!"

▶️"Kethkar will be so pleased!"

▶️"Nobody puts Fishy in a corner!" - A reference to Dirty Dancing.[6]

▶️"Scout's Disonor..." - A reference to Scout Law[7], which is commonly referred to as Scout's Honor.

▶️"Fishy! You were supposed to protect me!" 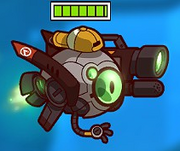 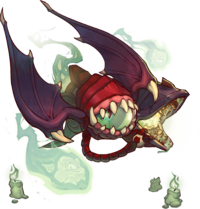 The servants of Kethkar had gathered in the deepest, most sacred room of the hidden refuge known as the Blood Halls. There they awaited word from the Blood God, who would give all of them a purpose in this world.

And from his throne, Kethkar spoke to the first of them, a Wraithlord: "You will be my hand, and strike the non-believers from this world!". He then turned to Max, and spoke "And you will be my eyes! Find the non-believers and spy on them! Reveal their secrets to me!" And so Max found his new purpose, having reported on the news across many different worlds in the years before, he would now forevermore use his skills in service of the Blood God.

This DLC contains a custom skin for Max Focus in Awesomenauts, and comes with a fully customized voice set! - Official Steam Store description.

This skin turns Max into a fleshy eldritch horror, which looks like a large eyeball coming out of a mouth. He has a row of spines extending down his back and his fins are replaced with bat-like wings. His gun is turned into a strange creature, which he refers to as "Fishy".

Flood Light looks like green mucus and has new sound effects. The animation for Scene Illumination has Max extend his eyeball out of his mouth, and the bullets are green slime. Slow-mo Shot is a gigantic eyeball.

Getting belched up from the spawning pits hurts like a dry eye, but Malicious Max is ready to serve his dark lord Kethkar. "What's that, my dark lork? Spy on these non-believers? Yes, right away!"

This Premium Max Focus skin will send chills down spines with his grotesque looks and creepy new voice.