Nibbs is a dragon warrior in service to the Sisterhood of Coba. This demonic group was bound to the Omicron dimension who, as soon as the Starstorm ripped a hole in the continuum, started an invasion of conquest.
Right after going through the portal, Nibbs's ship landed on the space station. Scouting around, she mistook Gnaw's tail for a juicy piece of fruit. After he was bitten, the startled Gnaw led her right back to the Awesomenauts who managed to convince her to stay with a wide variety of exotic treats.

In the thick of the fight

All turrets she smashes

One blink and she flashes

Fruit and candy are her big desire

And she's gonna set the stars on fire

It's all that she needs

She will break nor bend [sic]

Right there 'til the end

Blazing and beaming, ferocious and bright

In the thick of the fight she is raging with might

As long as the treats are alright

▶️"Our stuffs are in trouble!" *gasps*

▶️"Oooh, what does this button do?" - A reference to Dexter's Laboratory [2]

▶️*Growls* "Enter the dragon! Shpow!" - A reference to the movie Enter the Dragon[7]

▶️*Growls* "Don't stand in the fire!" - A reference to the popular World of Warcraft[8] meme of the same name.

▶️"Burn baby burn! Flames are getting higher!" *Growls* - A reference to the song Burn Baby Burn[11].

▶️*Growls* "Does Nibbs gets a treat now?"

▶️"Great balls of fire!" - A reference to the song Great Balls of Fire[14]

▶️He-Zurian: "Stop them!" Battle Nibbs: "No touching our things!"

▶️He-Zurian: "Regroup!" Battle Nibbs: "Back to the castle!"

▶️He-Zurian: "By the power of Graygrowl!" Battle Nibbs: *Battlecry* - A reference to He-man and the Masters of the Universe.[21]

▶️He-Zurian: "Where?" Battle Nibbs: "Our prrrincess is in another castle!" - A reference to Super Mario Bros.[22]

▶️He-Zurian: "By the power of Graygrowl!" Battle Nibbs: *Battlecry* - A reference to He-man and the Masters of the Universe.

▶️He-Zurian: "Heyyeyaaeyaaaeyaeyaa!" Battle Nibbs: "What's going on?!" A refence to the Linda Perry song What's Up?[23] and the popular He-Man themed cover of it[24].

▶️He-Zurian: "Take that!" Battle Nibbs: "Battle Nibbs did all the work!"

▶️He-Zurian & Battle Nibbs: "We have the power!" - A reference to He-man and the Masters of the Universe.

▶️Battle Nibbs: "By the light of Nibbs' fire!" 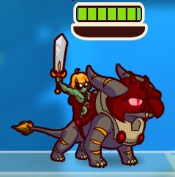 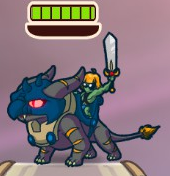 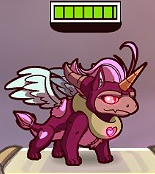 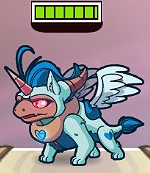 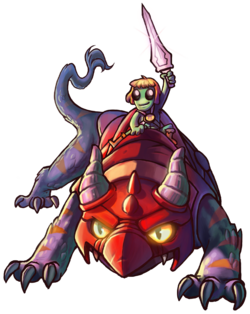 Battle Nibbs is here! Clad in fiercesome armor, and with freshly-brushed fur, she pounces onto the battlefield with the most powerful Zurian in the Universe! The hunt for Skreeletor is on!

This DLC contains a custom skin for Nibbs in Awesomenauts: Starstorm, and comes with a fully customized voice set! - Official Steam Store description.

This skin makes Nibbs look similar to Battle Cat[27] from He-Man and The Masters of the Universe[28], with battle armor, a metal saddle and helmet. Her body has yellow, tiger-like stripes and a lion tail. Her wings are removed and she gains cat-like fangs. A small, blonde-haired Zurian dressed like He-Man[29] (The "He-Zurian") rides on her back and wields a tiny sword.

Nibbs' auto-attack is changed, as the He-Zurian also strikes enemies with his sword, fire breath has a different sound effect (more feline sounding) and orb of Omicron is shaped like Orko's[30] head from the same franchise.

This skin features a special teleporting animation which includes the He-Zurian raising his sword up in the air, which then sparkles. 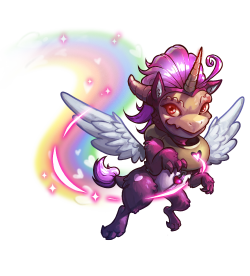 Unicorn Nibbs is a unicorn warrior in service to the Unicornhood of Coba. This magical group was bound to the Ohmigosh dimension who, as soon as the Starstorm ripped a hole in the continuum, started an invasion of cuddliness.

Right after going through the portal, Nibbs' ship gently touched down on the space station in a pink cloud of smoke. Scouting around, she mistook Gnaw's tail for a juicy piece of lovely unicorn candy. After cheerfully biting down on the treat, the startled Gnaw led her right back to the Awesomenauts who managed to convince her to stay with a wide variety of exotic treats, lots of petting, and by brushing her manes.

This skin puts Nibbs in a unicorn costume, complete with a mane, a puff at the end of her tail, and a unicorn horn. A zipper can be seen on it as well. Her collar and back leg now have a small hearts on them. Her wings are now pegasus wings. Walking around will leave behind a rainbow trail.

Dragon Frenzy is slightly brighter and makes glittery effects. Orb of Omicron now looks like a heart with wings on it and leaves behind a rainbow trail while flying. Fire Breath itself is unchanged, but it has a new sound effect when it's used.