As an honorary Star Scout, Penny's lifestyle was one of exploration and adventure. During her years out scout-badge-hunting among the stars on her trusty space-scooter, she saw many wonderous places and lifeforms.

One of the many hobbies that developed during these years, is the collecting and stuffing in jars of those same wonderous lifeforms and various other doodads. Cataloguing and archiving everything in neatly labeled containers for her own private collection is something Penny takes great pride in.

While adding the latest uncooperative alien lifeform to her jar collection, she contemplated the meaning of life, the universe and everything. Looking back on all those innocently staring eyes from the rows upon rows of jars, Penny realised that there was so much more a sole Star Scout could do with a butterfly net! She swore a vow on scout's honor to stuff the galaxy's evil doers into her jars, making the universe a better place for the cute and the cuddly!

Without a second thought she jumped on her scooter and set off toward the stars. It was well beyond the point of no return when she realised that her trusty yet rather dated mode of transportation might not be up to the task of traversing the universe without the not-so-annual tune-up she forgot for the fifth year in a row.

As the scooter shuddered to an embarrassing stop somewhere in the Raki system, she kept her calm and assessed the situation. A brief scan for spare parts showed a strange uncharted derilict station in the vicinity which seemed to have everything she needed to fix her broken mode of transport. Awkwardly making her way toward it using the Star Scout approved Deep-Space Breast Stroke, she found the name "Starstorm" emblazened on the hull of this grimy time-worn, and seemingly abandoned spacestation.

During her searches inside the bowels of the station, she found a mysterious robotic claw artifact. Curiosity being known to killing the inferior feline species, this confident canine locked it immediately to her wrist and was suddenly awash with power.

Unbeknownst to Penny, she had just taken the first step toward the biggest adventure of her life!

She's an adorable scout, she is a true Awesomenaut

She is both clever and charmin', she is the darling of darlings

She is so foxy. (Lemme tell you a story 'bout this Awesomenaut)

One day she was out of luck, she and her scooter got stuck

There was this station in space, she felt the sweat on her face

Mmm-mmm-mmm... (and then she thought)

Instead of taking it slow, I better go with this flow

I am so foxy! Heeeeeey heeee

She's gonna make it, you cannot take it

If you won't give it, she's just gonna get it

▶️"Temper... Temper? You haven't even seen my temper yet!"

▶️"Can Somebody please go after them?"

▶️ "All right guys, destroy all barriers."- A reference to Fox McCloud, the main character in Star Fox 64.

▶️"Hit them Hard and don't hold back!"

▶️"Um well, I GUESS we should start doing something, right?"

▶️"Excuse me, this guys are all over me! Somebody get rid of them!"

▶️"If what I think is happening is happening... it better not be!" - A reference to Fantastic Mr. Fox[3]

▶️"Dodge this!" - Possibly a pun with Penny's voice actress, Dodger.

▶️"I wonder what mysteries I can uncover here..."

▶️"The quick brown fox jumps over the lazy dog!" - A reference to a well-known English pangram[8].

▶️"I really am a quote-unquote 'fantastic fox'." - A reference to Fantastic Mr. Fox.

▶️"This fox is on fire!" - Possibly a reference to Mozilla Firefox[9].

▶️"I'm shutting you down, Sentry!" 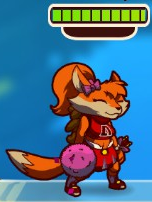 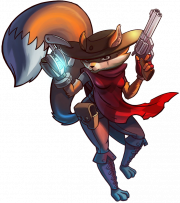 A stranger arrives on horseback at the border town of San Soleres, at the outskirts of the Raki star system. She is taciturn, watchful, and incredibly fast and accurate with her gun, able to outdraw and kill four bandits, out for blood and a quick solar buck, with startling ease. The innkeeper, Silvanito, asks the Stranger to stay in town, offer protection, become the Sherriff. The Stranger politely declines: "I can never call any town home. I'm a drifter, a lone gunfighter. A desperado." - Official Steam Store Description.

This skin gives Penny cowboy clothes, with a poncho and a cowboy hat with a bullet hole. She also has a scar on one of her eyes and is missing a piece of her ear. Her claw glove is replaced by a metallic claw hand, Pounce's flaming fox image is wearing a handkerchief and also has a scarred eye and Energy Pulse becomes similar to a bullet.

Her wrist-mounted gun is replaced by a magnum revolver which she uses to shoot bullet-shaped energy shots. 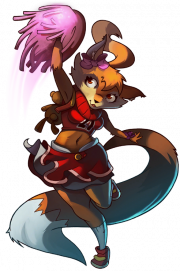 Who do we appreciate?

This skin gives Penny a cheerleader attire, complete with a miniskirt, a crop top, tennis shoes. She also has a teddy bear, ponytail and a bow on her hair. Her claw glove is replaced by a pon pon, Pounce's flaming fox image wears a football helmet and leaves a flower trail behind her and Energy Pulse looks similar to a pon pon and also leaves a flower trail as it moves.

Her wrist-mounted gun is replaced by a ribbon which she uses to shoot flowers.