I'm tired of seeing so many Pennys camping with ranged attack and going 3/8, when I go about 9/1 on average, so I'm trying to fix that here. let's begin!

Penny has great mobility and damage output for you to utilize, though only through charges. Communicate with your team to let them know when you need more charges. If you are unsure how to do this, just panic and scream "I NEED TO HIT SOMETHING!" like I do. If they need to heal, Penny rarely one-shots creeps, so ask them to let you hit them first, or cover you to get close to a droid or enemy 'naut. Personally, I'm not a fan of the ranged attack, as it's slow and doesn't have that much range. Oh yeah, Solo queue with Penny usually doesn't work out well. That's why I picked up other characters. Team communication is necessary for you to get kills and make it back alive. No matter how good you are, bad teammates can get you killed a lot.

Try to stick by teammates that can trap enemy 'nauts so that you can rush in and continue your killing spree. A good example is Sentry X-23's Black Hole. Penny lacks health a lot of the time, so early game without the ranged attack, it's better to just exist by a teammate and look scary and shoot off energy pulses, since they decrease defense.

Do not be alone until you have Zurian Mechanic and more health buffs. Zurian Mechanic is essential for Penny's damage output, it lets you do both of her abilities at once.

Depending on the map chosen, I may choose to go for more pounce damage and knockback to hit enemies into my turrets, teammates, or stage hazards (like the worm in Sorona, or off the bottom jungle of StarStorm).

Majority of the time, I prefer to follow these: 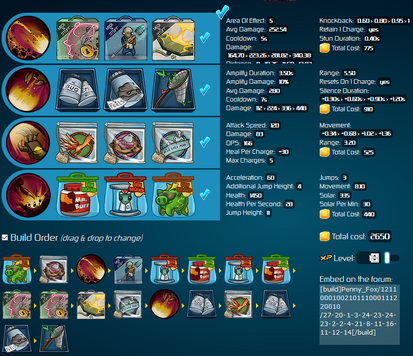 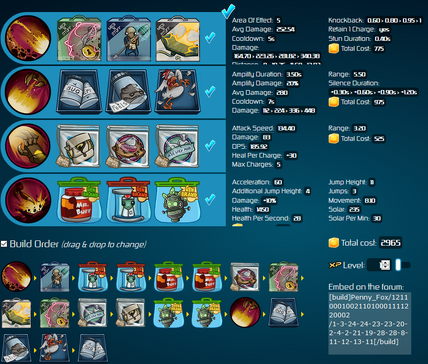 Chose which build you follow depending on what the enemy team's comp is. I also recommend not following these exactly, but adjusting to what you need in each game.

If you're a fan of the Foxy Boots, get them instead of the Piggy Bank/Starstorm Statue, but I believe Photovoltaic Lightning Charger is good enough to leave bad situations (leave bad situations at half health, or even at full if you could start a fight with a bad matchup), if not better since it ignores speed nerfs. Just make sure you land a claw after you use Pounce > Energy Pulse for a charge to use.

In general, to land pounce you will need to do one of two things. When pressured, enemies will near always jump. Knowing this, if you jump first and angle your pounce down at them, they will not jump into you. But secondly, if an enemies seems to not jump much, pounce straight at them on the ground to condition them to jump, which, again, makes pounce easier to land.

As mentioned earlier, stay near teammates and try to push a lane together. Penny should have the most droid kills a lot of the time, farming credits to buy the items you need. Don't go for kills unless you can safely make it back. Don't attack a turret for longer than a few seconds unless you have a way out. A cornered Penny at any point in the game is either dead or extremely lucky. If you are in a lane without droids, never leave your turret's side, no matter how much bait they give.

This is when you finish buying health upgrades and begin damage upgrades. Personally, I prefer to jungle a lot to farm credits and catch 'nauts off-guard trying to heal. Try to keep the enemy's creeps dead if possible on the current map. Feel free to make your own attacks now that you do a dumb amount of damage so quickly, but make sure they will kill or force someone to leave, otherwise you wasted your charges and took damage. Start pushing lanes a lot, considering kills actually don't matter that much (If you don't believe me, I had a game where we all went about 5/7 and only lost one turret). If you fall behind in levels, Penny can bring your team back quickly, due to the exp buff of being a lower level.

Is a monster. Kill everything, but remember that everyone else is also very strong. You can kill most 'nauts near-instantly, but respect your small amount of health at this level comparatively. You may feel like pushing is always the best option, but Penny is surprisingly good at defense also. Try to stay at base more if it's open. Have a teammate flank the attackers, and pounce them off of your drill into your teammates.

Remember, you can't win every game, it it will take a lot of experience to get decent at any game. Try to learn these sorts of strategies for every character in the game and your matchups with them. Good luck, and have fun!