From the wild meadows on Gromdom comes the beautiful and deadly Chilasi princess Qi'Tara. A four limbed warrior wielding laser coated chakrams. Shrouded in mystery, no one actually knows why she would ever be part of the royal court of the Scargi, considering the insectoid Chilasi and snail-like Scargi have been in a long dispute over the giant splumb gardens scattered across the planet. These two realms came to a head when the Chilasi vehemently maintained that the Splumb potatoes are a form of fruit yet the Scargi are extremely sure that it's, in fact, a vegetable. This could, naturally, only be settled with war. Some say she seduced the Scargi emperor to provoke her father, the king, others say she just did it to for his juicy splumbs.

For years she worked her way up in the Scargi military to become a royal guard in the order of the Scargi emperor and gained the title of femme fatale haricot beurre. Don't be fooled by her captivating looks because this deadly warrior has the best k/d in Scargi space.

She does have one guilty pleasure: every spare moment not seducing her enemies she can be found behind a frying pan, nibbling on some fried splumb taters. Her perfect curves stay in shape because of her hightened metabolism, but rumor has it that she is so obsessed with her looks that she even rubs her carapace with the yellow fruit to give it a golden shine. Never tell her that she has a problem, though, because she will cut you into tiny tiny pieces with her venom bladed chakrams.

Being from a different kingdom she has always been a bit of an outsider, but the renegades took her in as if she was family, After the incident at the palace she hid in the hot wastelands where the Scargi wouldn't be able to track her. This game of hide and seek is over and Qi'Tara's poisoned blades long for revenge.

▶️"This next sutra will floor you!"

▶️"Slice them into teeny tiny pieces!"

▶️"One blink from me and they'll buckle!"

▶️"I couldn't seduce them away!"

▶️"Do I really need to pay with a face like this?"

▶️"I have a pocket full of pollen!"

▶️"If my voice doesn't butter you up, maybe my poisoned blades will?"

▶️"I have a little informant... in every port!"

▶️"If you're very sweet to me, I'll let you play with my chakrams!"

▶️"I have a sutra that will blow your mind... Literally!"

▶️"Like the grasshopper, I like to pull at my lover's head!"

▶️*Scarfing down* "I just can't say no to these shplumbs!"

▶️"It took nine harvests before I mastered the chakrams!"

▶️"Attraction. Is the science of being me!" *Laughs*

▶️"So what if I coat my carapace in shplumb juice?"

▶️"Pretty enough to die for!"

▶️"No more! Take these taters away!"

▶️"I am the face of seduction!"

▶️"Smiles up front, chakrams behind the back!"

▶️*Hiss* "You betray our cause, Rocket Renegade!"

▶️"No honey for you, Rocket Renegade!"

▶️"There's another mask behind you!"

▶️"Hide your face so the world will never find you!"

▶️"Prepare to tango for your life!"

▶️"Thugs on the dance floor!"

▶️"Those wallflowers over there... get them!"

▶️"They're coming for the buffet!"

▶️"I'll need a fresh gown for the ball!"

▶️"Masquerades are fun! But boy, are they expensive!"

▶️"Time to sashay out of here!"

▶️"When I return I expect a good dance!"

▶️"Last chance to up your dancing game!"

▶️"Well, I might as well be dancing with sardines..."

▶️"Curious who's the bug behind the mask?"

▶️"There's mystery in splendor and really lots of masks."

▶️"I feed off the lights and sounds of the ballroom!"

▶️"My introduction is one of death and seduction!"

▶️"What to wear to the next engagement?"

▶️"I once dropped a chandelier on someone... By design."

▶️"Last person dancing... is usually me!"

▶️"Oooh! I handle my poison very well, thank you!"

▶️"Argh, I can scarcely breathe in this mask!"

▶️"Well, wearing a mask is part of the fun!"

▶️"It's all fun and waltzing... until someone chokes, of course."

▶️"Ready for the next arrangement"

▶️"How about a minuet to finish it?!"

▶️"What? Did everyone sprained their ankle?"

▶️"Keep up with the tempo!"

▶️"Where did all the dancers go?" 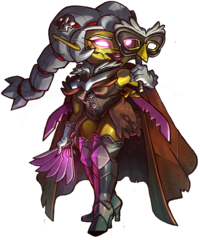 Serving as a member of the Order of the Scargi Emperor, Qi'Tara sometimes has to go undercover and blend into the crowd to protect Emperor Piere Feu Darret. Being a Chilasi (and armed to the teeth), that's rarely an easy feat. As a result, these tasks are usually left to other members of her Order when opportunities alow.

Once a year though, during the national Splumb Carnival, Qi'Tara mingles with the splumb-covered, masked partygoers - marvelling many with what they think is an elaborate Chilasi-costume. The only ones that find out she's not just PRETENDING to be a heavily armed Chilasi warrior are the would-be assassins she encounters.

For Qi'Tara the Splumb Carnival is the best day of the year as it allows her to indulge in her two favorite things: splumbs and murder.

This DLC contains a custom skin for Qi'Tara in Awesomenauts. You need to have Qi'Tara available as a playable character in order to access the skin in-game. Owning this skin will also unlock the special portrait for use in-game. This skin contains a fully customized voice set. - Official Steam Store description.

This skin gives Qi'Tara the looks of a renaissance period venetian carnival ongoer. She wears a wig and a carnival mask shaped like a raven, which completely hides her face. Her robes are darker colored and feature a slightly different pattern. She wears gloves, a corset and thigh high boots with heels.

She wields fans instead of Chakrams (which unfold in a circular pattern when thrown for Chakram Shift). Seven Star Strike has a bird-themed effect, leaving behind a trail of feathers while in effect.

Beautiful and deadly, the Chilasi princess Qi'Tara has always been a mystery to most. Especially since she joined the Scargi army, as the Scargi and Chilasi are supposed to be the mortal enemies. Qi'Tara just doesn't care for their age-old conflict over splumbs being fruits or vegetables. She just cares about the splumbs themselves. The very best splumbs. Some might say she cares for them a little too much.

Since the Scargi royal court would give her access to unlimited high-quality splumbs she quickly worked her way up through the ranks and became the emperor's femme fatale haricot beurre. She still remained a bit of an outsider, but Commander Rocket rightly saw her potential and his Renegades took her in like family.

When the Renegades later became outcasts due to the Salty Seal incident, Qi'Tara decided to stick with her new-found family. Now the time has come for the renegades to regroup and exact revenge upon those who denied her access to her beloved splumbs!