Roflnauts is a mini game that plays like Super Smash Bros. It is only accessible on the PC version of the game. You can unlock this mini game by getting to level 13, then going to the shop on the tutorial. ROFLNAUTS? can be found by navigating Steam\steamapps\common\Awesomenauts\Data\Rofl and then double clicking on ROFLNAUTS.exe

ROFLNAUTS.exe can also be found as a buyable upgrade in the tutorial which is where it's meant to be found according the the designers.

This minigame was in fact not made by Ronimo Games itself, but it was a gift another company by the name of Vlambeer, in celebration of Ronimo Games' five years as a company and the launch of Awesomenauts. Also, unlike Awesomenauts, the tracks for Roflnauts were composed by Fin Send and not Sonic Picnic.

It looks to be a map based off of Sorona. 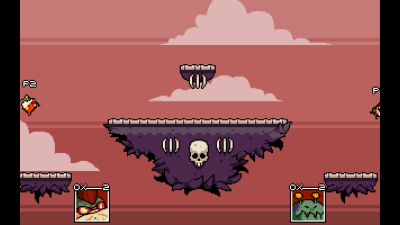