Deep in the bowels of the derelict station, an army of killer robots remain deactivated in storage containers, withering away to rust. The remaining functional robots futilely await the moment they are called back into action by masters who are now long dead. Centuries pass without any activity aboard the drifting colossal station. Not until the station’s backup systems flare back to life, providing enough energy to reactivate some of the still operational robots. One of these is known as Sentry.

Sentry is a special infiltration and reconnaissance unit whose prime directive “If you can’t beat ‘m, join ‘m, and then beat ‘m anyway cause they won’t expect it” has served his kind in many a war. Being clearly built for stealth, fooling enemy troops by mimicking anything from an umbrella to a designer coffee table, he is the first to be sent onto the battlefield to gather intel. After emerging from his stasis and discovering an enemy mercenary ship that has landed on the Starstorm, he snuck himself aboard, disguised as an inconspicuous Phone Booth.

After overhearing the crew that the robots lost the AI war and that his comrades have been turned into kitchen and household appliances, he reprogrammed himself for vengeance and planned to destroy them all! He now works, undercover, for the Awesomenauts until he has gathered enough Solar to buy a very serious tank, one with a shark printed on the front!

You have a collect call from:

You have a collect call from:

▶️"Your refrigerator is running. Why aren't you?"

▶️"I've calculated your chance of survival, but you won't like it." - A likely reference to Marvin the manically depressed robot from Hitchhiker's Guide to the Galaxy[3].

▶️"You really grind my gears." - A reference to a Family Guy sketch.[4]

▶️"Resistance is futile." - Reference to the Borg[5] alien race from Star Trek[6].

▶️Operator: "You have a collect call from:" Sentry: "Help me!"

▶️Operator: "You have a collect call from:" Sentry: "Help me!"

▶️"They saw through my disguise!"

▶️"Exterminate!" - A reference to the Daleks[8] from Doctor Who[9], aliens who are well known for this particular word.

▶️"Awesomenauts, roll out!" - A reference to Transformers[10].

▶️"Danger! Danger!" - A reference to Lost In Space.

▶️"This is an emergency broadcast transmission!"

▶️"Any claims that I may be scheming to kill you are all incorrect."

▶️"I'm not going back to plan your eventual demise."

▶️"Statement: I am most eager to engage in some uncensored violence." - A reference to HK-47, a character in Star Wars: Knights of the Old Republic[12].

▶️"Rest assured: I have no master plan to erradicate all organic life in the universe."

▶️"Your connection has been terminated!" *Beeps*

▶️"Life? Don't talk to me about life." - A reference to Hitchhiker's Guide to the Galaxy.

▶️"It looks like you're *beeps* dying. Would you like some assistance with that?" - A reference to Clippy/Clippit/Office Assistant[18], a help tool in pre-2007 versions of microsoft office.

▶️"The person you're trying to reach is on a killing spree."

▶️"One shall stand, three shall fall." - A reference to Transformers

▶️"M-m-m-m-m-megakill!" - A reference to the Unreal Tournament[20] announcer phrase for consecutive kills.

▶️"Any claims that I may be scheming to kill you are all incorrect."'

▶️"I'm not going back to plan your eventual demise."

▶️"No more stealing parts for you."

▶️"Pow!" - Possible reference to one of the Heavy's taunts in Team Fortress 2

▶️"Super massive black hole!" - Reference to the Muse[24] song of the same name

Giga Sentorii's lines may not be literal translations of the original quotes. Below you can find The quote in Japanese language, its phonetic translation and its English translation respectively.

▶️お前の母計算機はだった Omae no haha ha keisanki Datta (Your mama was a snowblower!)

▶️お前はもう死んでいる Omae wa mo shindeiru (You are already dead.) - A reference to Kenshiro[25] from Hokuto no Ken[26].

▶️２０秒以内に銃を離さないと後悔させる 20byou inai ni jyuu wo hanasanaito koukai saseru (If you don't put down your weapon in less than 20 seconds, you will regret it.)

▶️この機の偽装が見抜かれた! Kono ki no giso, minukareta! (They saw through my disguise!)

▶️この機がキミらを破壊する噂は全部嘘 Konoki ga kimira wo hakai suru uwasa ha zenbu us (All rumors that I may be scheming to kill you are incorrect.)

▶️お前の破壊を巧む為に戻ると思うな Omae no hakai wo takumu tame ni modoru to omou na (I'm not going back to plan for your eventual demise, if that's what you think.)

▶️安心しろ、宇宙の生物を絶滅する気はない Anshin siro, utyuu no seibutsu wo zetsumetsu suru ki ha nai (Rest assured, I have no intention to eradicate all organic life in the universe.)

▶️この機の事、信頼できる Konoki no koto, shinrai dekiru (You can trust me.)

▶️そうはさせない！ Sou ha sasenai (I'm afraid I can't let you do that.)

▶️死にかけてるようだな、手伝おうか？ Shinikaketeru you dana, tetsudaouka (It looks like you're dying. Would you like some help with that?)

▶️エリアコントロールを獲った Eria control wo totta (I have taken control of the area.)

▶️お前の破壊を巧む為に戻ると思うな Omae no hakai wo takumu tame ni modoru to omou na (Don't think I'm going back to plan for your eventual demise.)

Specimen X-58's quotes consist of hisses and growls and have no discernible meaning whatsoever. 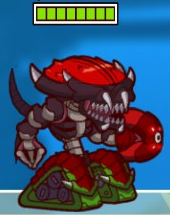 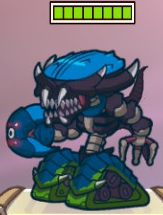 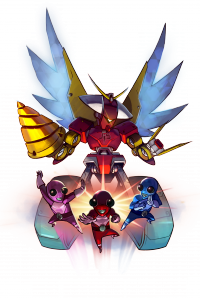 Handcrafted by the elite Zurian battle team known as the Power Strikers, Giga Sentorii is only called upon in the most dire of situations. The Giga form is therefore rarely seen on the battlefields.

This DLC contains a custom skin for Sentry X-58 in Awesomenauts, and comes with a fully customized voice set! - Official Steam Store description.

Being heavily inspired by Gundam/Super Sentai Japanese culture, this skin makes Sentry a mech piloted by Zurians. He has white paint in some of his armor, a different-looking arm cannon, golden wings, a golden samurai helmet ornament and his claw is replaced by a golden drill.

Black Hole Sun has a Kanji symbol for "Heaven" on the black hole, Teleport Beacon plays a gong sound upon being placed and has the "Power Strikers" symbol on it. It also plays ambient music when players are close enough to it. Both of his abilities are a lighter shade of purple/blue. His idle "on the phone" animation is replaced by him pointing his drill upwards, which then shines and Energy Thruster's propeller is replaced by jet boosts on his back. The gears inside Sentry's treads are replaced with drills that rotate while he moves. Finally, when teleporting back to base, the Power Strikers Zurians will appear on his head and pose while the animation is taking place.

Being premium, this skin comes with a unique voice set. 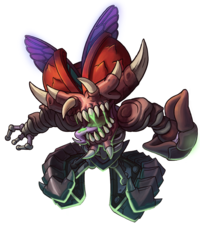 During one of his recon missions, Sentry infiltrated the commercial space ship Nostrilmo disguised as a lamppost. However, all members of the human crew had already perished in a fierce battle against a powerful Xenomorphic being.

In its wake, the being had left a gross pulsating egg and when he uncovered it Sentry realized that he had finally found a way to overcome the last limitation in his abilities: to mimic biological beings. Sentry quickly imprinted his consciousness on the embryonic alien within the egg.

Years later, the Nostrilmo crashed into the Starstorm station and unleashed a never-before-seen horror upon the Awesomenauts!

This skin gives Sentry a black mouth and body details inspired by the Xenomorphs[27] from the Alien franchise. Sentry's eye is removed. He has two free-flowing tentacles on his back and green slime covering his treads. His arm cannon is replaced with a fleshy bulb that has an eyeball in the center.

Photon Mines are made of dripping orbs of team-coloured acid and have new particle effects when exploding. His jump animation is changed to his head splitting into ladybug-like wings. The shield of Black Hole Sun is unchanged, but has a new sound effect. The black hole projectile has a new design and the black hole itself has an image similar to the Zerg logo[28] inside it. Teleport Beacon has an image of Specimen X-58's head and two rows of alien writing surrounding it. His idle "on the phone" animation is replaced by Specimen X-58 roaring.

Being premium, this skin comes with a unique voice set.