From Awesomenauts Wiki
(Redirected from Shop)
Jump to: navigation, search 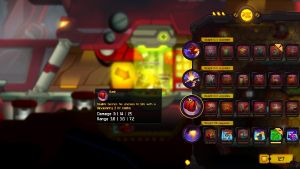 Zork's Mega Shop (or simply shops or stores) are located in each teams' bases where upgrades can be purchased with the in game currency, Solar. Players are taken there after teleporting, and while there, their health will refill quickly, making it a helpful place to retreat to when near death. It is also possible to access the shop while dead, as long as it's done before the respawn minigame.

In older versions of Awesomenauts, the shop would only have the items the player selected prior to joining a match (see Loadout). This was changed in Patch 2.6 Reloaded, however, which introduced its replacement: Zork's Mega Shop. The new shop also visually indicates how many stages of an upgrade have been purchased using a yellow progress bar below each upgrade.

Each Awesomenaut has their own unique selection of upgrades, with a few exeptions on the utility tab.

If an upgrade is purchased by accident, it can be immediately refunded if the user clicks on an "undo" button in the bottom-left corner before leaving the shop or buying another upgrade.

While standing on the shop press the Open Shop Button (default keys are X, □ and B for Xbox, Playstation and PC/Mac/Linux respectively). Once there, highlight the desired ability or upgrade and press the same button again to purchase it or pres A/X/B to close the shop.

From Patch 2.6 onwards, Awesomenauts includes a "Recommended Build" feature, providing players with a preset build order: the next suggested upgrade in the build order always has a little yellow banner on its top-right corner; purchasing that upgrade moves the banner to the next upgrade in the build order. By default, Awesomenauts comes with two suggested recommended builds for each character, a "new" build for players who haven't unlocked every upgrade for their character and a "pro" build for those who have. These are defined in the Awesomenauts/Data/RecommendedBuilds/.

To create your own customized build, create a new file in this directory using the following format [class]_[level]_mod.build (e.g. dasher_pro_mod.build for a Froggy G. with all upgrades unlocked) - _mod builds are always searched for first. Then, open the file in a text editor and either: