Skølldir the Terrible Space Viking has raided over a hundred spaceports, cargo ships and grocery stores. His legendary thirst for battle is unquenchable. Great raids are usually followed by great feasts and soon his nickname was altered to Skølldir The Terribly Overweight Space Viking. Nothing could scorn Skølldir more than this honorless title!

Skølldir has set out on his space barge to impress the universe with his lightning fast fighting skills to prove this moniker wrong and show his nimbleness. Anyone who would dare to call him fat is met with a rapid series of crushing punches and is thrown aside. All the while, Skølldir's metallic suit is telling him how many calories he is burning.

If you find yourself on the battlefield, and hear the sound of crushing bones and thunderous farts in the distance, flee as Skølldir's fury is upon you!

'Stram', in this case means 'quite powerful' or acrid, as in smell or taste. Viking Lemonade!

▶️"Belly's gonna get ya!" - Reference to a Reebok TV advertisement[1]

▶️"I'm saying this, because I'm low on health!"

▶️"Cya later Awesomenauts!" - Reference to a quote from his voice actor, Simon Lane[4] of the Yogscast.

▶️"I can't believe they charged me for two seats!"

▶️"See ya later sh*tlords!" - Reference to a quote from his voice actor, Simon Lane of the Yogscast.

▶️"It's an all-you-can-eat buffet of my fists!"

▶️"The ground can taste me bottom!" 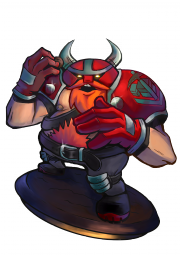 "Check out the new, free Honeydew skin for Skølldir, provided by the Yogscast. Honeydew has been unleashed upon the Galaxy! Defending his right to bear Jaffa Cakes and pummeling evildoers with his Fists of Fury!" - Official description.

It can be found here for free. This skin replaces Skølldir's metal armor with one made of leather with dark pants that does not protect his face, arms and belly. He also has a leather belt and an orange beard.

His skills are unchanged, but Bash has a new animation on the third hit, being a giant pickaxe instead of a giant fist. Mighty Throw has a new pattern. The Homeless Gnome's appearance is changed to resemble William Riker.

This skin is a "homage" to The Yogscast, seeing as Skølldir was voiced by Simon Lane. 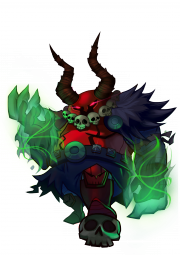 "Summoned by a sorcerous ritual, Demon Skølldir has entered our realm! Chaos follows in his wake! Tremble mortals, and despair for Demon Skølldir's fiery fists of doom are upon you!" - Official Steam Store description.

This skin gives Skølldir dark leather armor with black fur on his pants and shoulders. He has metal ornaments on his gloves, a different belt and a necklace made of skulls. He has demon-like horns instead of the usual ones on his helmet.

Homeless Gnome is a replaced by a tiny demon and a Bash's third hit is a giant claw instead of the usual fist. Mighty Throw gains a fire effect. 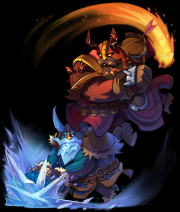 Old spacesailors tell the tale of Jotunn Skølldir, who was banished from his homeworld and carved a path of destruction through the galaxy. Worlds that fell victim to his rage were swallowed by lava or entombed in ice, leaving none alive. Supposed to wield both fists of undying flame and the cold of an eternal winter, Jotunn Skølldir truly is one of the last remain legends of the galaxy. Those who have witnessed the destruction left behind by him are never the same.

Jotunn Skølldir was designed by community member CrimsonYeti for the Design-a-skin competition and was chosen by the community as one the runner-ups to Grim Genji from more than 250 submissions! - Official Steam Store description.

This skin gives Skølldir the looks of a mythological Norse giant, or Jötunn: His beard and horns are made of magma/ice and he wears a team-colored helmet with a golden ornament in it. He wears team-colored leather armor with golden details below the waist and on the shoulder pads (those have fur on blue team). His belt is a golden chain with a shield as the buckle and his leather gloves have brass knuckles with spikes on them. Finally, he has a wooden shield with an arrow stuck on it attached to his shoulder pad.

Mighty throw has more fiery/frost sparkles and Homeless Gnome is replaced by a tiny yeti (orange with brown fur for red team, blue with white fur for blue team). Earthquake's default shockwave is replaced by magma spikes/icicles and bash has the same shape as his unique gloves.

Being an ultimate skin, Jotunn Skølldir has unique looks depending on which team you're on: Fire-themed for red team, ice-themed for blue team.