From Awesomenauts Wiki
(Redirected from Snork)
Jump to: navigation, search

Although Snork Gunk is considered one of the better conchballers in Scargi Space he never reached first league with his team, the Pearl Sluggers. He always criticized the sport had become too slow. Blaming the slugs at management for trying to slow the pace of the game, games that were already drawn out over the span of 14 Earth months. "With an average of only one or two goals a game, you have more fun watching paint dry" he complained. After many times of being disqualified for scoring too quickly, the team benched him for good.

Fed up with his failed carrer in sports he decided to join the Scargi military police hoping for some more action by tracking and hunting down enemies of the empire. After a good run of swift catches, he was assigned on a mission to hunt down the fugitive Rocket's Renegades. Realizing the Renegades had joined the ranks of the Awesomenauts, a team of 'big league' mercenaries, he applied for the transfer of a lifetime...

Snork is the man

He’s swiffer than a fan

Snork is the slug

Snork Gunk is the man

Swiffer than a rusted fan

Cuz they can't see me like a sudden glance

Conchball used to bring him fame

But sluggishness was not his game

His speedy moves just got him banned

So now he's got a different plan

Once a sportsman, now a cop

He’s reaching for a juicy crop

Who knew he could move with a boost to top

These losers, you think you're cool, STOP

Turn it up now and don’t go slow

He’s as fast as a tornado

Enjoy and watch the snork show, in stereo

And if you hear any noise

You better run cause there is no

You’ll have no choice

flow, he’s such a pro, you see him glow even incognito!

Snork Gunk is the man

Snork Gunk is the slug

Once inmates of the Scargi jug

For salting food of Pierre the slug

A band of outlaws flees the scene

Cause they don’t wanna act on his movie screen

But Rocket Renegades they have fear

Cause Snork's swift justice rushes near

Not flinching for a foul onslaught

And make sure you don’t hurt that nauty!

Break time now, give him some slack

And clap to his slimy track!

We gonna party with the Snork now,

We gonna party with the Snork now yeah, yeah,

▶️"Did you wet yourself, piggy?"

▶️"Just try to touch this!"

▶️"We gotta do some defense!"

▶️"Gotta check on my sponsor!"

▶️"Step aside! MVP coming through!"

▶️"I know how to use the three seashells!" - A reference to Demolition Man[1]

▶️"Were you rushing or were you dragging?"

▶️"My center of gravity is in the stratosphere!"

▶️"Pass that thing and watch me flex!"

▶️"Get this thing into overtime!"

▶️"Hoping for some fast footwork today!"

▶️"Imagine that! Me in the Awesomenauts!"

▶️"The transfer of a lifetime!"

▶️"You messed with the best!"

▶️"That's why I get the top contracts!"

▶️"Hello? Anyone left on the field?"

▶️"Have you come to steal my balloons?"

▶️"A banana wouldn't slip on you!"

▶️"There's only room for one prankster here!"

▶️"They're trying to put a smile on my face!"

▶️"I'm supposed to be the scary one!"

▶️"Ow! I maxed out my Mime Mastercard!"

▶️"Retreating is hard with floppy shoes!"

▶️"Time to retouch my powder!"

▶️"Bloodstains on my poofy collar? Again?!"

▶️"Who's that flopping at you at high speed?"

▶️"Don't lump me in with those horror clowns!"

▶️"Any idea how long it takes to apply this makeup?"

▶️"I'm only laughing on the outside!"

▶️"I get so cramped waiting under your bed!"

▶️"Is there a clown union I can join?"

▶️"Ha! The unexpected is the biggest surprise!"

▶️"Hey I mean, how do magnets even work? Nobody knows!"

▶️"Quit raining on my parade!" 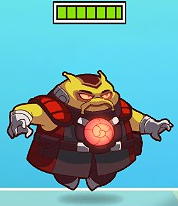 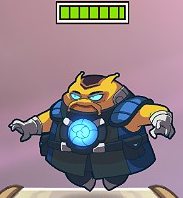 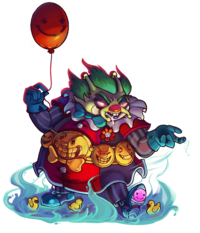 For the better part of a year, Bozo Gunk entertained guests outside the Pearl Sluggers stadium ahead of every home game. He quickly became a beloved and well-known character among fans, but one day he simply disappeared. When asked for information on what happened to their favorite mascot, the Pearl Sluggers management simply replied "Wait, who? We never had a clown work here."

The fate of Bozo Gunk remained unclear and fans were left wondering what had become of him, but a mysterious crime spree and series of (still unsolved) kidnappings ended did come to an end around the time of his disappearance. Last week, old-time fans were surprised to see an old friend reappear near the Pearl Slugger stadium to spread cheer and happiness once more.

This DLC contains a custom skin for Snork Gunk in Awesomenauts. You need to have Snork Gunk available as a playable character in order to access the skin in-game. Owning this skin will also unlock the special portrait for use in-game. This skin contains a fully customized voice set. - Official Steam Store Description