The Starstorm Station is the 6th Awesomenauts map. It was released on April 27, 2016 with Patch 3.1.

Starstorm Station was released as part of the Awesomenauts: Starstorm Expansion. However, it is free to use for all players in all modes.

In the Raki star system, a gigantic remnant of the first AI war drifts near the burning star. This massive unfinished battle station is called the Starstorm.

Emergency reports of the sun imploding into a giant burning space storm have indicated that the Starstorm has somehow been activated. The news of the clearly battle-ready station has drawn the attention of the Ones and the Zeros.

Both factions have sent their best teams to investigate and secure the station and gain control of the Starstorm's destructive power! 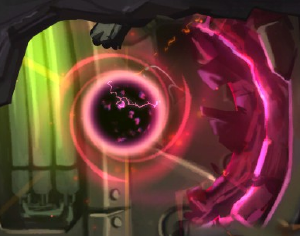 One of the entry point portals. 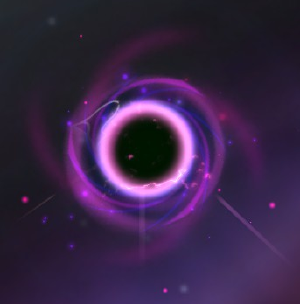 One of the exit point portals.

The Starstorm Station features 6 teleporter portals. Three of them are entry points: two located behind and above each team's outer bottom turrets and one floating above the bottomless pit in the middle of the map below the bottom lane. The other three are exit portals: two located between the top-lane turrets of each team and the third above top lane in the middle of the map. Entering any of these portals will teleport the Awesomenaut to the corresponding exit portal (each bottom-lane team portal leads to the portal above it, while the portal in the waste disposal leads to the center). To most Awesomenauts, these teleporters are the only way out of the waste disposal shaft that leads to the bottomless pit and the only way to quickly change lanes.

In the middle of the bottom lane, below the map's hide area, there's a waste disposal shaft that leads down to a bottomless pit. The area is filled with Solar coins, platforms, and two creeps. It also features a teleporter, allowing non-flyers a way out. Players that fall down the bottomless pit are instantly killed. 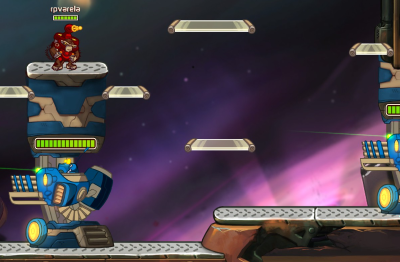 The inner top turret is exposed from the start (click to enlarge).

Lastly, unique to the Starstorm layout the inner top turret is exposed to enemy attacks from the very start. Meaning players who are feeling bold can technically jump between both enemy top turrets and try to take out fleeing enemy 'nauts or even attempt to destroy the turret itself. It is technically possible to win a match on this map by destroying just this one turret, as doing so disables an energy wall that protects the Solar Drill.

While there are areas behind the outer bottom turrets that could partially hide flying Awesomenauts, there is only one "true" hide area in this map. It is located in the middle of bottom lane, granting access to the bottomless pit.

There are 4 creeps in this map. One above each team's inner bottom turrets and two above the bottomless pit. Killing them will drop a small Healthpack that restores 250 Health, and grant 5 xp, plus 3 Solar.