Should the patch 1.1 slide be updated to costumes?

The main page seems to be glitched as of this moment. Anyone else seeing this or is it just a problem with my browser?

Should we add an option to show the costume art on a hero page and also his in-game both original sprite and costume sprite?

I've contacted Ronimo about the sprites. Waiting to see if they can deliver them or not.

Upgrades template updated to match patch 1.10. I didn't change the new version of power pills turbo (exclusive to froggy and leon, it seems) and didn't add the new voltar skin. I don't know how to add those, sorry.

Note that the link to awesomenauts website actually leads to "awesomenuats.com".

Thanks, I fixed it.

Who IS that 'naut? 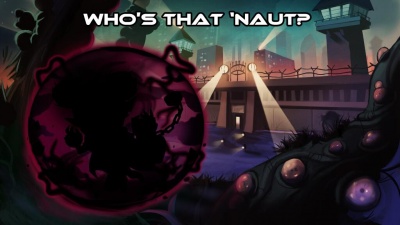 Silhouette of the next 'naut to come.

So, I see that we recently got a sillhouette of the next 'naut to come (not Swiggins, but the other upcoming one). We didn't get really any information on this 'naut so far, which is a big contrast to what we got with Genji before his release. So now I ask; who's that 'naut?

Basically, what are your guy's theories behind this mysterious being, and what do you think we could expect?

The little information that we were leaked with is that this 'naut has abilities that are very different from all the rest(as told on purpose by Joost), and that it's going to be female(accidently leaked by Joost).

From what I can see from the graphic that we have now, this character is likely to based around some sort of dark-magic, judging by the shadowy bubble thing. I think that this could indicate the manipulator character that people have been wanting, so basically; debuffs and area denial is what I think could be seen.

Also, it looks like either a jail or the gates to a well-protected city. I'm thinking that based on this, she could either be am escaped criminal who was put in because of the use of bad magic, or that she was run out of the city for the same reason.

Appearance-wise, I think I see a chain and a robo-hand, maybe? It's especially hard to take anything out of this picture than other Who's That 'Naut pictures, but I can get at least that. It looks like she'll be able to float with that bubble, and it doesn't seem like she would be human. I also see a tattered dress or robe, so she may look like a more traditional witch.

Post you ideas here, I would love to see them :3

For those who don't know, Nautsbuilder is a website that can put out a specific way to build your naut easy and effectively. I love this tool, but the sad thing is that I never see it used here. So as a suggestion, people be forced, or atleast suggested to use this tool?GameBoy14 (talk) 08:48, July 20, 2013 (UTC)

Nautsbuilder is fairly recent. Give it some time and help spread it so people can see it and eventually it will be used a lot more. ;)

Also, since we are talking about nautsbuilder, I'd like to talk again about RinsHale's suggestion: Make a button for nautsbuilder on the main page so people can see it and access it with ease. It could be placed on the main page between the 'nauts portraits and the roles/gameplay/mechanics/maps columns.

What do you guys think?

Also as another suggestion, instead of us having sepperate 'naut builds. How about we just have one huge build page is which it is more finely presented? GameBoy14 (talk) 22:00, July 21, 2013 (UTC)

Thx I'll consider the fix width. Sorry for all the edits think I need to sit down and rethink the main page, I don't want the space gamepedia offers to goto waste. I'm gonna browse other gamepedias and learn from their main pages. What file is the main css document for gamepedia I have the feeling I might need to define some new style classes. Thanks again for advice look forward to working with you. — Littlefreak3000 (talk) 02:26, 16 November 2013 (UTC)

Adding matchup pages for each 'naut

So I constantly random pages to see what I hidden bits I can find on the wiki, and if you look at recent changes you can see that I found a page for Admiral Swiggins and Froggy G. I poked around a little bit and found out that that was the only matchup page on the wiki. I did like the idea, though, so I'm wondering what you guys think about official matchup pages for each 'naut. I was thinking that if we wanted to do this, we could add a tab for it in each 'nauts articles that would lead to a list of all of their matchups that the community could contribute to. What do you guys think about this? --PuddingskinMcGee (talk) 17:38, 10 December 2013 (UTC)