Ted McPain was one of the great heroes of the first AI Wars, a long time ago. He has led his squad of elite super soldiers, the Killer Koala’s, against many opponents and has been decorated as an outstanding soldier a hundred times over. His ultimate achievement, during the climax of the First AI Wars, was a solo operation onto the AI’s battle station Starstorm. This mission ended in Ted McPain single handedly unhinging all of the station’s crucial power couplings, effectively making sure the station wouldn’t be completed before the end of the war. Ted McPain eventually died when he sacrificed himself to save the Sunny-Daisy Alien Orphanage from a band of bloodthirsty dinosaur zombies in 3021. Ted’s heroic deeds would never be forgotten.

He lived on as he became the star of various video games: Ted McPain I through XVII, Ted McPain: Zombie Blast, Ted McPain vs. evil Ted McPain and Ted McPain Unicorn Dance Karting.

When Voltar The Omniscient learned of the violent dimwitted video game star, he brewed up a plan that would backfire horribly. He created the Materializotron XT8000 with which he wanted to bring back the war hero of old to be his personal assistant. Extracting Ted McPain’s digital essence from his video games, Voltar managed to materialize a life-size flesh and blood version. The Ted McPain that appeared though was missing his pants for unknown reasons. Voltar waved the issue aside saying “Stop asking stupid questions! He looks fine to me.”

Got no pants on, still he looks okay.

Standing on the corner,

he's ready to be bold

Finger on the trigger,

his legs are kinda cold.

Now things are coming back,

There's no need to alter,

he's ready for the ride.

Thanks to his friend Voltar,

restored in all his pride.

And now again so strong,

just how he used to be.

His stars and striped thong,

do make him feel so free...

▶️"I had the perfect line for this moment... But I forgot it."

▶️"Get your tickets to the gun show."

▶️"We have them surrounded, at least from this side." - A reference to Team Fortress 2 character, the Soldier.

▶️"Kaboom, baby!" - A reference to the Marauder, a unit from StarCraft II[5].

▶️"Bringing out the big guns."

▶️"Let's have a blast." - A reference to the Marauder, a unit from Starcraft II.

▶️"What I think about the war? I think we should win!"

▶️"That's what I'm talking about."

▶️"Looks like I caught you with my pants down!"

▶️"You can hurt some people some of the time, but you can't hurt the king of pain!"

▶️"We got ourselves a stew going!" - A reference to actor Carl Weathers[7] on the comedy series Arrested Development[8].

▶️"Ted McDonald had a gun. Boom-boom-boom-boom boom!" - A reference to the Old Macdonald Had a Farm[9] song.

▶️"All aboard the McPain train! Choo-choo!" - A possible reference to Cole Train, from the Gears of Wars series

▶️"Nothing better than the smell of ozone in the morning!" - A reference to the popular "Smell of napalm in the morning" quote from the Apocalypse Now[11] movie.

▶️"Skree got in for a long day. A loong day." - Possible reference to Terry Tate: Office Linebacker[13] commercial.

▶️"The Starstorm is upon us!"

▶️"What? I can't hear you over the sound of how awesome I am!"

▶️"You are getting front row tickets to the McPain show!"

▶️"It's getting a little bit too hot!"

▶️"This is getting outta hand!"

▶️"Attack! How can you say no to these muscles?"

▶️"This will match my hat!"

▶️"Now don't you go anywhere! Imma be right back!"

▶️"Heading back to party central!"

▶️"Don't forget to tip your waitress!"

▶️(Singing) "If loving me is wrong, you don't wanna be right!"

▶️"Ted's here for your entertainment!"

▶️"Your eyes' up here, thank you very much!"

Drop Pod In on Starstorm

▶️"Look into the pretty light!"

▶️"Skree got in for a long day. A loong day." - Possible reference to Terry Tate: Office Linebacker commercial.

Note: Titanium Ted shares some lines with the default skin.

▶️"Here to condense the nonsense!" - Possibly a reference to the Terry Tate: Office Linebacker Reebok commercials.

▶️"I'm getting torned up here!"

▶️"I want those reinforcements, I want them NOW!" - A reference to the teaser trailer of the never released StarCraft: Ghost[19].

▶️"Rock n' roll!" - A reference to the Marine from StarCraft.

▶️"We got movement! Proceed to eliminate!"

▶️"Fall back! FALL BACK!" - A reference to the teaser trailer of the never released StarCraft: Ghost.

▶️"More bang for the buck!"

▶️"Back to the rendezvous point!"

▶️"Locked and loaded!" - A reference to the Marine from StarCraft.

▶️"Time to kick some serious butt!" - A reference to Jim Raynor[22], a character in StarCraft.

▶️"Make room for the big dog!"

▶️"Last one alive, lock the door!" - A reference to Team Fortress 2 character, the Soldier.

Drop Pod In on Starstorm

▶️"Hell, my grandma could've handled this mission!" - A reference to the teaser trailer of the never released StarCraft: Ghost.

▶️"360 noscope!" - A "360 No-Scope" is a trickshot in FPS games such as "Call of Duty" and "Halo" where players spin around in a full 360 degree angle (otherwise known as a full circle) and immediately shoot, usually resulting in a kill.

▶️"Outstanding!" - A reference to the Marine from StarCraft.

▶️"With great vengeance and furious anger!" - A reference to a biblical[24] passage well known for being used in the movie Pulp Fiction.

▶️"All day, every day! Believe that!"

▶️"Pain... is weakness leaving the body!" - A reference to US Marine Corps propaganda.

▶️"Skree got in for a long day. A looong day." - Possible reference to Terry Tate: Office Linebacker commercial.

And you won't run him a rig

Or you will dance the hempen jig

I was a little scallywag

Ever since that I was born

Day and night I stole and snagged

Until the early morn'

I started as a bilge rat

But that didn't last long

A pirate's what your looking at

So listen to my song

Don't ye ever risk it

You'll be a delicious dish

I cleave ye to the brisket

and feed ye to the fish.

I'm stealing that I snatch this

I'm proudly so to say

So batten down the hatches

A storm is on its way

The lookout in the crow's nest

He saw a mighty treasure chest

With a motherload of loot

I let them know that we are here

Run a shot across the bow

▶️"I hope you step on a barnacle!"

▶️"Get the tar and feathers!"

▶️"Can't I just pillage and plunder this stuff?"

▶️"Like getting yer spine ripped out!"

▶️"I've returned to pester - and slaughter - the living!"

▶️"Who be sayin' pirates are all drunk ninnies?"

▶️"Lemme scare the living soul out of ye landlubbers!"

▶️"Ah, the sight of fresh powder before my cannons!"

▶️"Ohh, the taste of sea urchins beneath my barnacled boot!"

▶️"First one to sing 'You're a crook, Captain Hook', walks the plank!" - A reference to a running gag[29] from the TV series Arrested Development[30].

▶️*Singing 'You're a crook, Captain Hook'*

▶️"I'm the greater of two weevils!"

▶️"I have the largest pirate hat!"

▶️"Neptune's navel, that was good!"

▶️"May the most rotten pirate win!" 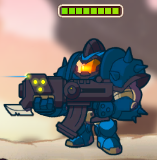 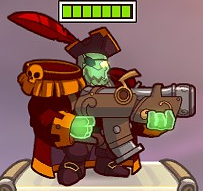 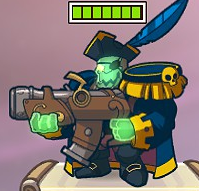 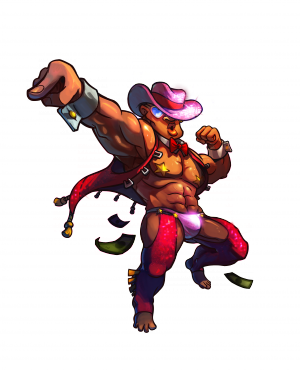 It's time to get wild, baby! Celebrating a Bachelorette, Bar Mitzvah, Birthday, Graduation, or want to spice up your family Christmas dinner? No matter the occasion, you can hire Party Boy McPain for your next event. Anytime... Anywhere... Saddle up!

Ted's jumppack is removed and his guns have golden stars attached to them, while Airstrike has a star-shaped beacon. Ted also leaves behind a trail of banknotes as he moves, similarly to Vinnie & Spike.

Being a premium skin, Party Boy McPain comes with many unique lines as well. 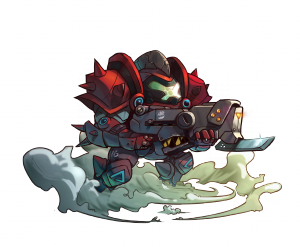 When things get too hot, Ted rocks his Titanium Marine outfit. This armor has withstood gunfire, acid, solar flares, psionic radiation, power swords, plasma cannons, Zurian butterknives and rabid blowfish during the many battles Ted has fought. The armor comes with air-conditioning, aim assist, onboard battlefield diagnostics, cable television and a built in candy cotton machine. It's time to get TITANIUM.

This skin gives Ted an armor that covers his entire body. It hides exposed skin by adding leggings, armor on the forearms and a crested helmet with an orange visor. The armor is darker in color in comparison to that of the default skin and features details such as spiked shoulderpads and elbow pads.

It also removes Ted's jumppack, gives Airstrike a skull-shaped beacon at the targeted area and alters the visuals of his guns, with the shotgun looking more advanced and the machine gun featuring a bayonet.

Finally, being a premium skin, Titanium Ted comes with many unique lines. These also have a radio filter effect, sounding slightly different in comparison to Ted's normal voice. 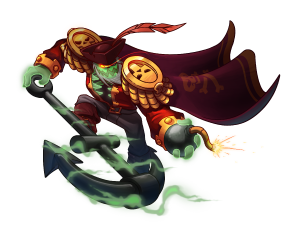 Captain McPain was a feared pirate throughout the seven galaxies. The man was well-known for his stature, his ability to carry around a full-sized cannon by himself, and his skill in actually firing the thing. He boarded many shipping vessels, claimed some booty, and distributed it fairly amongst his crew. He was as much a gentlemen as he was a fearsome rogue.

But disaster struck when one day he boarded a vessel operated by the Order of Popae Monks. When one of the monks was accidentally sucked out of the airlock, The Grand Space Butterfly took offense and cursed the pirate and his crew. On that day, Captain McPain became a ghost that would forever haunt the shipping lanes throughout the Galaxy. A haunting visage that strikes fear into those that travel the void!

This skin gives Ted the appearance of a ghost pirate. His skin is sickly green and glows, his mouth is filled with jagged teeth, and he wears and eye patch and has a white beard. He has a pirate's hat with a very large feather on top of it. In this skin, he's given brown pants and leather boots. He wears a captain uniform with shoulder pads that have skulls on them. He also has a large cape. His machine gun is altered to look like an oversized flintlock pistol while his shotgun looks like a ship's cannon.

His Machinegun bullets are ghostly green and leave a faint trail. His Shotgun blast looks like a skull and is surrounded in green smoke. Grenades from Ted McPain Unicorn Dance Karting become bombs, and they are marked with an X when they're armed. Airstrike is marked with dotted lines leading to an X, and the impact of Airstrike is now a massive anchor falling from the sky (the anchor will not appear if Princess Adlez Phonenumber is bought). Using Stimpack will unleash a ghostly green figure from Ted and play the instrumental version of his theme song (this feature was added after official release in Patch 3.4).

Being ultimate, this skin comes with unique voice acting as well as a unique theme song and killing spree.