Vinnie and Spike are notorious partners in crime and BFF's. Spike is the muscle of the team and a bit of a silent guy, he loves late night krab burgers.

Vinnie is quite the hothead, leaving Spike to do the heavy lifting while he plots out the next heist. With a pack full of restraining orders this little plankton devil is not to be messed with. They are wanted on numerous planets including their homeplanet Okeanos where the largest crime syndicate Shisu has put a reward on their head for stealing the Kullinan Koi, the biggest golden Koi ever known to fish and worth 4.8 Billion Solar.

Unfortunately the duo lost the Koi somewhere in the Atlantic ocean while fleeing from Interpool.

Being a pufferfish, Spike can gasp for air and float up, flapping his fins to move around. He is always ready for a fast getaway and can dash out of combat, leaving a smokebomb behind to fool his enemies, while both Vinnie and Spike run with the loot.

▶️"Yous gonna be sleeping with the fishes, see?"

▶️"I'm gonna take this mutt for a ride!"

▶️"I'm gonna tear ya to ribbons and mow ya down, see?"

▶️"I thought I was the robber here!"

▶️"I'm the biggest fish in this town! Myah!"

▶️"It's curtains for you pal, curtain!"

▶️"Vinnie's a little too smart for you, myah!"

▶️"Thought you could pull a fast one on me, huh?"

▶️"There's no messin' with Vinnie, see?"

▶️"They'll be reading about this on the newsreel."

▶️"That'll teach you to mess with a big fish!"

▶️"I'm the biggest fish in this town, myah!" 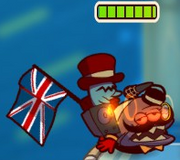 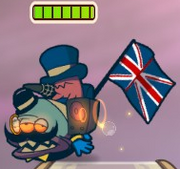 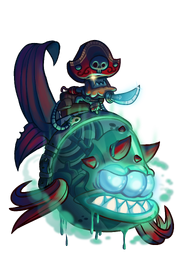 "You knew there was gonna be some sort of pirate-skin at some point, right? Chatting in piratespeech will never be more appropriate than when you rock this baby during an Awesomenauts match. All Yo Ho's, plank-walking references, plundering references and buried treasure references will be 74,2% funnier (and totally non-cliche) if you are manly enough to tread the interstellar battlefields as Cap'n Vinnie & Seadog Spike." - Official Steam Store Description


This skin gives Vinnie the clothes of a stereotypical pirate, with a large hat and a fake red beard. Spike becomes transparent and ghostly, and his pupils disappear.

They leave a trail of fishbones when they move instead of the traditional dollar bills, all bubbles fired from the Bubble Gun gain the same ghostly color as Spike. New team-colored glow effects are added to Spike Dive. 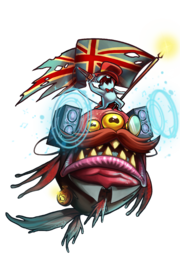 "Being part of the Royal British Digital Society of Well-Mannered Gentlemen, Cynical Vinnie and Total Spike have donned their finest attire just to treat you to their deadly fish and chips. Huzzah!" - Official Steam Store Description

This skin is based on Vinnie & Spike's voice actor TotalBiscuit and therefore has several references to him and to the United Kingdom. Vinnie Wears a top hat, while Spike has a mustache and wears a suit, a bowler hat and a monocle. He also has soundboxes on his back and a microphone which stays in front of Vinnie. Finally, Spike also has an upside-down Union Jack on his back.

The dollar bill trail they leave behind is replaced by a trail of french fries and he plays music when using Smokescreen. If Mammoth Sock with Holes is purchased, the question mark normally seen on the cloud is replaced by the "WTF" logo from TotalBiscuit's "WTF is..." series. Spike Dive and Bubble Gun are unaltered.