Voltar's past is shrouded in mystery. Rumor has it he once was a researcher at a star-encapsulating power station. The station made intergalactic headlines when it exploded around 500 years ago, sending off all kinds of strange, unseen radiation into space. In this explosion, the Al core of the Zero's was destroyed, bringing an abrupt end to the First Al War. Although peace was maintained for some centuries, the war eventually returned. Some think that war was just too profitable, and suspect that weapon manufacturers had a hand in the construction of a new Al core for the Zero's.

The explosion at the power station destroyed almost every part of Voltar's body, leaving only his brilliant brain intact. This brain was carefully placed inside a Braintank by salvagers. Through the years, and with help of his loyal robot drones, he made some nifty modifications to his braintank that enabled him to participate in the newly erupted Robot Wars.

No-one knows Voltar's true motives for participating in the war as a mercenary, but what can be assured is that he’s a mastermind with unmatched psychotechnic powers and an arsenal of armed robots that do his every bidding.

▶️"Hah! I build droids smarter than you!"

▶️"Don't do anything stupid without me!"

▶️"Insert slot A into slot B, ah sehr interessant!"

▶️"I shall remake myself, I have the technology!" - A reference to Six Million Dollar Man[6].

▶️"I am the brain of the operation."

▶️"I am the brain of the operation."

▶️"My brain outnumbers you all!"

▶️"My mind is mightier than your blaster, HAHA!" 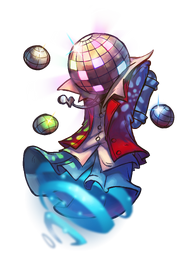 Burn baby burn! Love is in the air as Disco Voltar is here with a funky groove. He won't stop 'till he gets enough, and this daddy cool will make sure everyone is stayin' alive. Lose that brainjar and party like it's 2399 with Disco Voltar! Boogie on! Includes funky healbot music! - Official Steam Store Description.

This skin gives Voltar a disco suit with a music note necklace and replaces his braintank with a disco ball.

His drones are also replaced with (smaller) disco balls and shoot rainbow-colored lasers while both techno synaptic wave and healbot's aura get green musical note effects. Although the healbot itself is unchanged, it plays a disco tune while it is active. 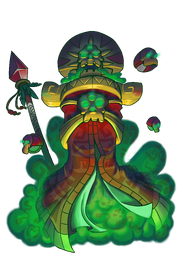 Make Voltar channel the powers of the ancient Aztecs with this awesome Necro Voltar skin! If you own the Steam version of Swords & Soldiers, Ronimo's Award-winning debut side-scrolling strategy game, you will recieve the Necro Voltar skin in Awesomenauts for FREE!

This skin adds golden details such as a skull emblem and shoulderpads to Voltar's robe and replaces his braintank with a golden three-eyed aztec mask. His drones' eyes are replaced with golden skulls and there are green glyph effects on both techno synaptic wave and healbot. Healbot also has a different look, being shaped like a Swords and Soldiers' Aztec statue. 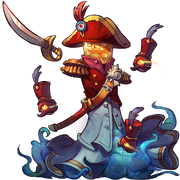 This DLC contains a custom skin for Voltar in Awesomenauts, and will automatically unlock the character if you have not already done so. - Official Steam Store description.

This skin gives Voltar the millitary outfit and iconic bicorne hat (with a white plume) used by Napoleon Bonaparte. He also has a saber in a sheath and a medal in his chest. His drones wear french infantry hats and have moustaches, techno synaptic wave is a fleur-de-lis and leaves a trail of additional fleurs-de-lis and croissants, the satellite dish animation used in healbot's summon is replaced by a fork and croissant, while healbot itself has wooden wheels and Napoleon's bicorne hat and its "timer" aura is replaced by a trio of fleurs-de-lis. When summoned, healbot plays a few seconds of "La Marseillaise", France's national anthem.